Thank you for helping me unearth some of the most cringe-worthy pieces of writing I've ever committed to paper and for capturing my barely passable web and graphic design skills and for reminding me once again just how unbearably pretentious and annoying I was in college.

It all started with Geocities... 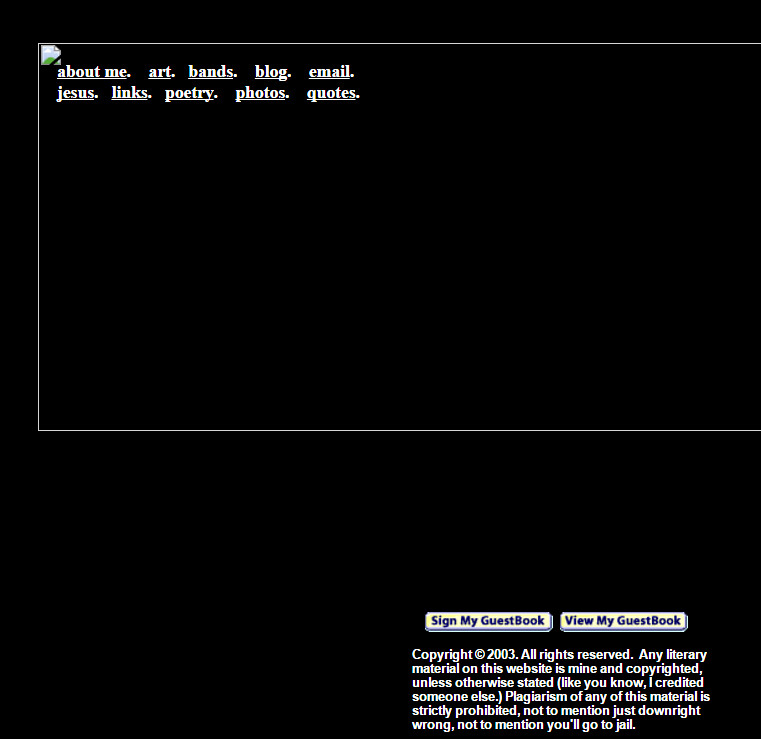 Unfortunately, there isn't much archived from that page. Pity too. I had tabs called "art", "poetry" and "jesus". Although actually the Jesus link still works, and so does "quotes". And how about that awesome copyright? 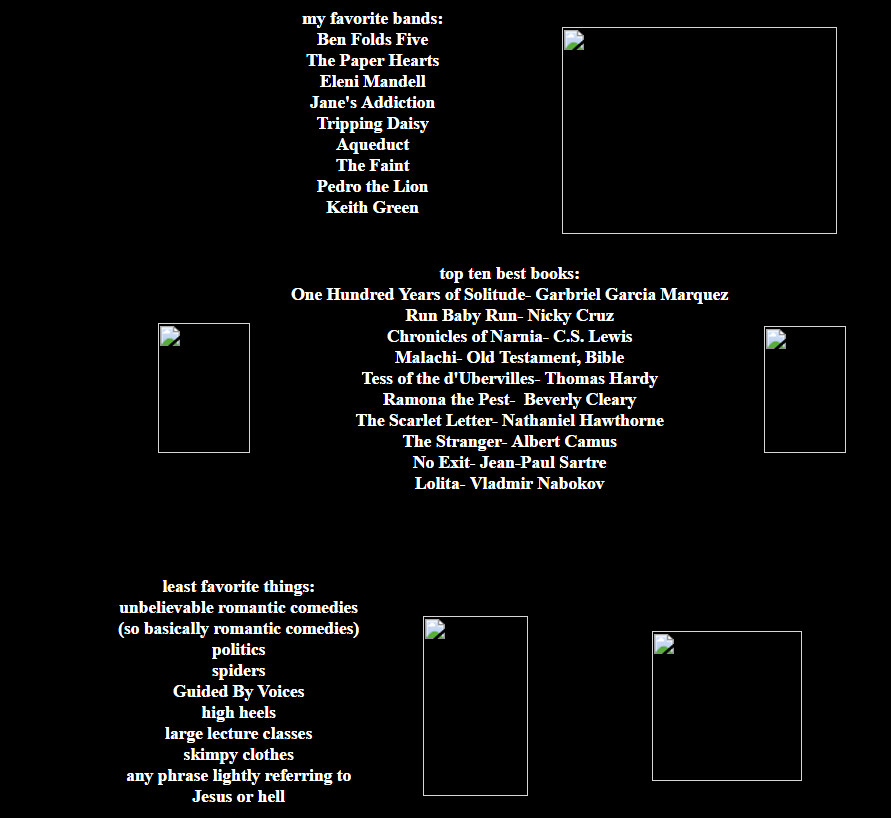 Then I entered the world of domain names and Dreamweaver and voila. Superlori.com was born.

Then I got married and two websites (well a website and a Xanga) became one.  Meet the original scottandlori.co.uk.  This might be the most cringy thing I've ever seen. Complete with a "Books to Burn" list in the sidebar. Puuuuke.

The site progressed, as websites do...

These were the days of interactive images. (Go ahead, scroll over.)


And everything was in web frames. 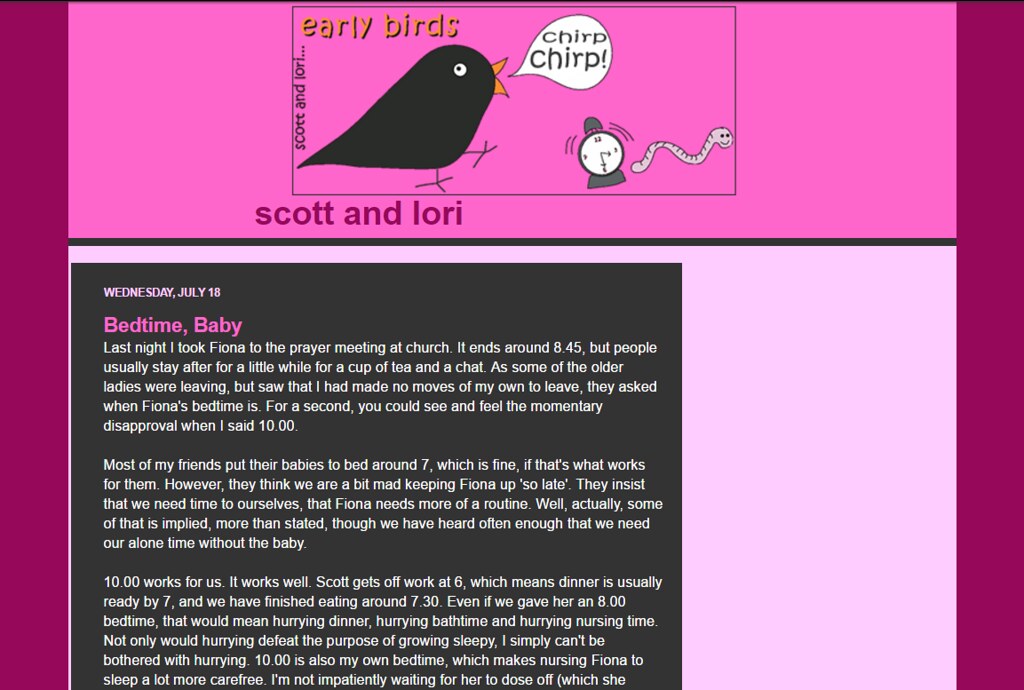 Finally I got tired of designing my own sites with Dreamweaver and resorted to using Blogger's own templates. Which I still use today because I finally realized I'm really not a web designer.

And to bring it all full circle, we finally managed to catch scottandlori.com after vying for it for years. The previous owners released it, and we snatched it up. We became a dot com.

Through these sites I found not just bad web design and embarrassing blog posts. I also found some essays I'd written in college. I'd like to share them with you, but I don't have it in me to be that self-deprecating.  My essay on the Jonathan Edwards' sermon "Sinners in the Hands of an Angry God" for instance made me want to punch a baby penguin. My "creative non-fiction" piece about childhood imagination made me gag and roll my eyes and cry a little for what a terrible writer I was.  But I will give you this - the least cringe-worthy piece of them all - my creative response to John Donne's poem "The Flea".

Thank you, Wayback Machine. No really, I can't thank you enough. I now marvel at the fact I had any friends at all.  Ta.

The Flea's Response: A Letter To the Editor

Dear Editor:
My name is William J. Bennet, more infamously known as just "the flea". I am writing on behalf of a highly offensive poem published by Mr. John Donne. I am an upright citizen, who believes in morality and decency; this man has carelessly involved me in all sorts of indecorous deeds. I would like to state that I would never engage myself in the fornication or seduction of which he has accused me. In this letter, I would like to publicly state that I had nothing to do with the conspiracies of this man to entangle his mistress into the act of pre-marital lovemaking, and to correct any and all fallacies presented in his poem, "The Flea."

First, I would like to comment on his insulting remark regarding my size. He states "How little that which thou deny'st me is". Excuse me for having self-confidence, but I believe that, despite my size, I have worth. However, for the sake of argument, let us agree that I am quite small. Mr. Donne would like to imply that the act of fornication bears no more importance than a flea. This is simply not true; sex is created for marriage, and in my opinion, to take it out of that strict limitation is a far bigger ordeal on the Scale of Importance than what he perceives a flea to be.

Now I will admit that, yes, I did indeed bite both of them. However, Mr. Donne blew that mild and God-created instinct out of proportion. I bite because I am a flea; I bite because I am hungry. This is my humble rank in the food chain. I do not grumble over my existence; nay, I eat for survival and expect others to do the same. He is correct in saying that this is neither "a sin, nor shame, nor loss of maidenhead." Yet, he then goes on to accuse me of enjoying the blood in a sexual manner. I, in no way, had the foul intentions of creating a "marriage bed", when in my stomach their "two bloods mingled be." I am a flea. Yes, I enjoyed my meal, but the implications made were simply horrifying. Mr. Donne goes even further to say that what I have done was so crass that it was more than what his mistress would do with him. These accusations are so humiliating that I am red-faced just addressing them.

Mr. Donne seems to have the idea that three lives now exist within me. Before I go on, allow me to point out the ludicrousness of this point. If he would like to believe that now they are "more than married" because his blood was mingled with hers, then he must also believe that he is "more than married" to the ten other people who I had bitten within that same period of time. But to remain on topic, Mr. Donne tries to convince this chaste woman that in me lays their only "marriage temple," of which I have already stated was purely coincidental. I would like to say that no "temple" has been crafted inside me that would compromise anyone's morality, as would be the case in this particular circumstance. I shall never approve of pre-marital intercourse, and therefore would never help others to facilitate it.

I must commend this woman for staying true to the morals instilled in her by the church and her parents. Mr. Donne seems to ridicule her for it, and perhaps even shame her, comparing the provision of her parents to a prison of darkness. I can even forgive her for her murderous intentions, for at least they were sincere. Mr. Donne shows no sincerity when he beckons her to resist. His only argument was that if she killed me, she would not only be committing one crime, but three: two murders, and a suicide. He reasons that he and she live in me, and I adamantly refute that. I am outraged by the despicable and cunning techniques he uses in his attempt to convince her to participate in his debauchery. He has turned her own convictions against her, causing confusion over which deeds are ethically better or worse. If this were not wicked enough, he involves me, an innocent passer-by, in his vile machinations!

I must now clear up yet another misrepresentation. His lady did not kill me. On the contrary, I promptly left the scene after biting the couple. I had a stomachache and needed a respite. Hours later, I was informed that a dear companion of mine, Donald McNeil, was mistaken for me and "purpled thy nail" of Mr. Donne's mistress. Truly it was the "blood of innocence." I weep now, remembering my friend and how his life could have been spared had not Mr. Donne brought us into his extended metaphor, his conceit. My pain increased when I read his careless remark about the situation. The only thought on this man's mind was sex. He had asked her before to spare my life, even though for selfish gain, but that was put-on. I realized he did not care whether I lived or died when, instead of rebuking his mistress, he uses the opportunity to make another point for his defense. He has the audacity to tell her that by murdering the flea she mistook for me no harm was done, similar to the harmlessness that would ensue after an unbridled sexual experience with him. I find this purely offensive.

I took this poem to be a personal assault on my character. I do hope that in writing this letter I have sufficiently cleared my name and regained my dignity. Once more I declare that I am innocent of these accusations brought before me in this poem by Mr. John Donne.

Posted by Lori Arnold at 12:00 AM
Email ThisBlogThis!Share to TwitterShare to FacebookShare to Pinterest
Labels: funny, sarcasm & snark, Throwback Thursday