Angle of Repose by Wallace Stegner 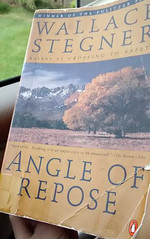 Do you have a book that digs so deeply into your heart that it pains you to read, yet you can't stop reading it because it reveals truths to you that even you did not realize - or want to accept - were inside you?

That book is Wallace Stegner's Angle of Repose for me.

I have just finished it. It's actually the third time I've read it. The first time was over ten years ago for an online book club while I was engaged to Scott. I did not know what marriage would be like, and I didn't know my soon-to-be husband the way I do now, but even then, every word of the novel was a warning: Don't underestimate him. Don't try to change him. Don't betray his trust. A quiet man is not an unfeeling man; don't confuse the two.

The second time I read it was while pregnant with Baby Jaguar. Once again, I was struck by how similar my husband is to the novel's Oliver. Once again, I heeded (and was thankful) for the warnings: Do not stand in his way for selfish reasons. Do not wish him to be anything other than what he is. Appreciate his strengths, though they are different to yours, and forgive him his weaknesses (for you have your own). Defend him against criticism. Do not hold him at arm's length.

This time I found myself thanking the book wholeheartedly for all those warnings. For this time I saw in myself how like Susan I am. As little as I'd like to admit it, I too am proud, a little snobbish, a little over-concerned with appearances. Every time I have read this book, I have noted how too close the story cuts, how in an alternate universe, this could have been us. Without those warnings, with less magnanimity, with less careful effort, we could have been doomed to the same fate - the same discontent woman, the same stubborn man, with such promise but too many mistakes.

I have wanted to review this novel a hundred times, but I am unable. It is too close, it is too revealing. I recognize in it how lucky we have been - no, not lucky. Careful. Hardworking. Fair. Open and honest. Aware. We have not, we shall not end up the same as Susan and Oliver Ward, living the rest of their lives at the angle of repose, after a downward tumbling life eventually settled near the bottom of the ravine. We shall have our ups and downs. We shall have our adventures. We will not settle for living happily-unhappily ever after.

All I can say in review is a quick synopsis:

Historian Lyman Ward, the grandson of Oliver and Susan Ward, much to ignore the effects of his debilitating skeletal disease, takes to his grandmother's letters to her dearest lifelong friend Augusta to write about her and her husband's life developing the West in the late 1800s. She, an Eastern genteel and he, an aspiring engineer with no college degree, marry after a long and unconvincing "courtship" that existed only in correspondence, and she joins him in their first homestead in the West. In her mind, it is a temporary settlement while he gets the experience he needs to return to New York and became an Eastern engineer. He understands that an engineer's life is in the West and will always be. And thus they begin a life of disappointment, successes, stalled work, poverty, hope, love, regret, friendships, loneliness, disaster, and exile. Amidst the stories of Susan and Oliver's erratic and restless lives, Lyman must also wrestle with the reality of his own life - a failed marriage, a failing body, a meddlesome son, a ridiculous secretary, and a faithful but aging friend/nurse. He is living in the very house his grandparents lived in for the last half of their lives, among the same roses his grandfather cultivated, the same roses whose scents hung in the air as heavy as the memories they carried from a life lived happily-unhappily ever after.


It's a long book. It's a hard book; not word-wise, but emotionally, at least for me. It could have been me. It could have been Scott. I am imperfect, I am not the best wife for a quiet, intelligent, deep man... or am I? Was Susan? Maybe she was, and maybe I am. It is possibly our choices in life that make us perfect or not perfect for someone, not simply our temperaments. All I know is that I have read this book three times, and all three times I have found myself not merely tearing up, but quite literally sobbing throughout and especially at the end, not only over the plot line but the truths it has revealed. It is without question my favorite book. It is heartbreaking. It is real, it is honest.

I could never write a full review of it, for to do that would be to write a full review of the worst versions of my possible self, the versions that could have been me, that in an alternate universe might actually be me. I can never reveal those flaws of which I am too acutely aware my capacity of exposing. I'd rather keep those revelations securely bound between the covers of this remarkable book.
Posted by Lori Arnold at 2:02 PM
Email ThisBlogThis!Share to TwitterShare to FacebookShare to Pinterest
Labels: 2015 Reading Challenge, books, marriage