New Ink: Into the Looking Glass 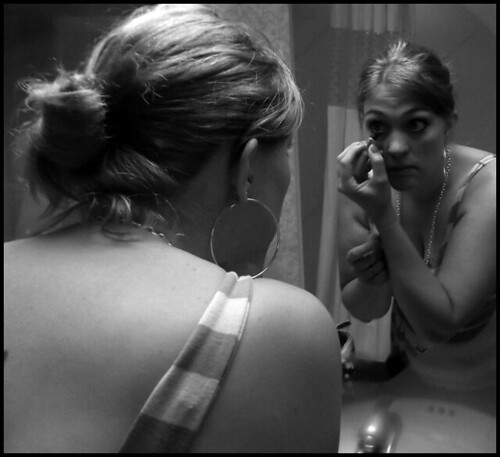 A few weeks ago, my main squeeze and I went on a date, where we ate bison burgers and sweet potato fries dipped in marshmallow sauce, and got ourselves inked.

This was Scott's first tattoo, and it was a big deal. He got this: 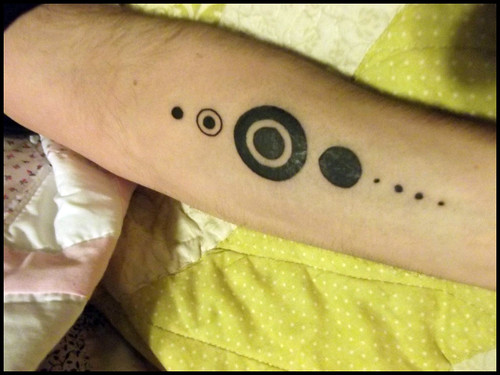 (We've been kind of amazed at how few people have been able to figure out what it is.)

Me, this was my fourth tat, so not quite such a big deal.

As a reminder, I have a tattoo trio already of faith, hope, and love, all in Arabic calligraphy. And yes, I know enough Arabic to know that they all say exactly what I think they say. I may not remember much from my year of studying Arabic, but I still know enough. Enough to read something to you but not have a clue what it says.

It's a beautiful design. (I'm sorry I can't give credit to the person who designed it though, because she seems to have removed it from the web. I'm glad I downloaded it before she took it down. I wonder, does tattooing yourself compromise intellectual property rights?) This is also Arabic calligraphy. The idea of getting illusion tattooed on my skin did seem cheesy and possibly misleading, but at the last minute, it's the one I chose to go with. 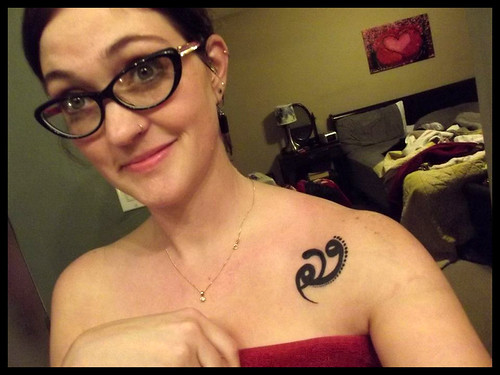 I love it. However, the inevitable question has since popped up repeatedly: "What does it mean?"

An old friend once cautioned me never to get a tattoo that didn't mean anything, because you'd spend the rest of your life shrugging when asked that inevitable question. Those three squares on his arm mean nothing.

The word in Arabic, وهم (pronounced "wa-HEM-a") specifically means "illusion" but can be loosely translated in other ways. I've been finding it easier to loosely translate it as "imagination" for the average person on the street, rather than explain what "illusion" means to me.

But I'll explain it here.

When I look at myself in the mirror, I see a fat girl. There, I said it.

The word "fat" is supposedly banned in our house. It's our family's f-word (and is way worse than the other one). I am so very against body shaming, so supportive of positive body image and loving your body... for everyone else but myself. I still look at myself and see a mess. Even though I'm now at a healthy weight and have a pretty healthy lifestyle (let's not discuss the Easter chocolate though, please), I still have very poor body image. It probably wouldn't matter if I lost yet another 30 lbs, I'd probably still see someone twice my actual size in my reflection.

I have to tell myself consciously, explicitly, daily, that this is an illusion.

What I see in the mirror is illusory. It's something my brain invents to tempt me to do all sorts of stupid things. I have to constantly tell my brain, You're wrong. I'm beautiful. I'm healthy. I love my body.

This tattoo now stares back at me in the mirror too. It tells me the same thing. I am healthy. I exercise regularly. I *generally* eat well. I am beautiful. Anything I believe about myself otherwise is an illusion.

But if I pass you on the street, and you ask me what it means, I'll probably just say "imagination". Because that's easier to admit.
Posted by Lori Arnold at 4:43 PM
Email ThisBlogThis!Share to TwitterShare to FacebookShare to Pinterest
Labels: beauty, fitness, health, life, Love My Body, mental health, satisfaction, tattoos