Ways In Which Arkansas Wants To KILL You

With a severe weather warning season firmly upon us and after shooing a red wasp out of my car yesterday AND a suspiciously bulbous black spider with a violin on its back (red or white, which one is in under contract with Satan?), I decided it's time to make a list of some of the reasons I need to leave Arkansas.

Because Arkansas wants to KILL you. 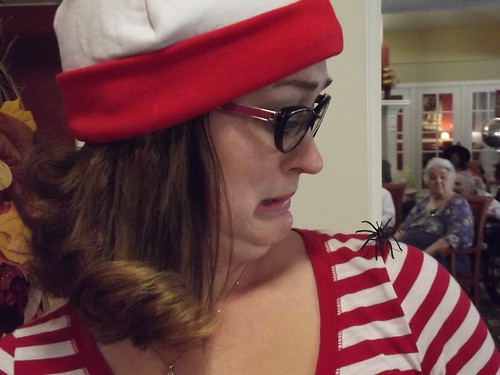 1. Black Widows. It's like, it's not enough to just be a spider; it has to be an ugly, deadly one.
2. Brown Recluses. One that will destroy your flesh. Then kill you.
3. Red Wasps. So they may not kill you, but they will build their nests on your front porch and then attack you and sting the crap out of you. If they could talk, they'd have little collective demon voices.
4. Scorpions. So far, haven't seen one. But they are out there, and they are mean little bastards.
5. Ticks. Lyme Disease. Rocky Mountain Spotted Fever. And they will leave their heads inside your flesh if you aren't careful. WTF?
6. Rattlesnakes. Deadly AND have that creepy Western movie prelude playing in the background. Cue tumbleweed. Then death.
7. Copperheads. Seriously, these guys THRIVE in my neighborhood. Domesticity doesn't phase them one bit.
8. Baby copperheads. These little buggers are even meaner than their mamas.  Like little Children of the Corn, but snakes.
9. High heat indexes. If all of the above doesn't kill you first, the 110°F in the middle of July and August ought to finish you off.  And if even that can't take you down...
10. Tornadoes. No, seriously. Not being funny. I am terrified.

I'm actually not sure how I survived my first twenty-two years of my life living in this state and now the last almost two. Living in Arkansas is like playing a never-ending game of Russian roulette, and surely my luck is going to run out soon.