Autism and My Humble, Humble Thoughts 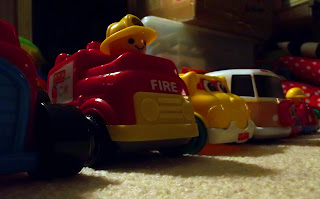 I heard someone say once that they could spot a child on the Autistic Spectrum a mile away. Her child was autistic, and she knew the signs. So far, we have been fortunate that none of our kids seem to be any of the 1 in 88. However, I have been around many children on the spectrum, and to a degree I agree with what's been said; a child on the spectrum can often be spotted, if you know what you are looking at.

There have been moments in the supermarket or walking through the town where the mere look in a child's eye, or the gait with which they walk, or the gestures they unconsciously make, has made me take notice and wonder...

I am no expert, and these are just a few of my very humble thoughts on the subject. It's just that something happened the other day that got me thinking about this. Just in case, to avoid any possible identifying markers, I am going to slightly change the details of this story, but the point will still (hopefully) be made.

I was out shopping in the town, and came to a shop door that was shut. A wee boy, about 4 or 5, was holding the door. 'Excuse me, sir' I said cheerfully to him, as I pushed the door open. But as soon as I did, I had a bad feeling about what was about to happen. And I was right. The boy roared, ran away to his mother, ran back and squeezed himself in a corner. Shoulders raised, arms straight down, hands in fists, head down but eyes raised at me in fury, the boy glared at me and roared to himself. I glanced around and saw his mother, looking a bit lost. I couldn't help but feel bad about opening that door.

After I was finished in the shop, I passed him again, and he was still in the same pose - fists straight at his side, roaring to himself, refusing to go with his mother. People were trying to calm him down, giving him ultimatums, but he was having none of it. I wondered if I had triggered all of this, by interrupting his plan to keep the door closed. The adults around him weren't being unkind or mean to him (thankfully) but all seemed a bit, well, lost.

I could be wrong, of course, but all I could think was, 'I wonder if that poor boy has gotten a diagnosis.'

From what I understand, in Scotland, Autistic Spectrum Disorders (ASD) are not diagnosed until after five years. Autism, being so completely different from person to person, is so horribly misunderstood. A child displaying behaviours that would place him or her on the spectrum, who doesn't get a formal diagnosis until five (or quite possibly much later) may have spent the first five formative years of his or her frustrating life being horribly misunderstood or even mistreated.

I don't know a lot about autism, and I don't want to talk about it as if I do. But here's what I'd like to say:

1) I think diagnoses should be made earlier, where possible. If parents, carers, family members and teachers are able to start putting things in place to make their child's life more manageable and less frustrating early on, how could this not be a good thing?

2) ALL teachers should be trained on how to approach and communicate with children with autism. Of course each child is different and will need different approaches. But if teachers knew even just generally the basics of what is going on inside these kids' heads and bodies, surely there would be a lot less frustration in the classroom - for the teacher AND the child.

3) People passing by should think twice about judging. This is obviously 'pie in the sky' thinking; it will never happen in real life. People will always judge, whether they judge the 'badly behaved' boy, the parents who have no control and don't discipline, or both. But we as people merely passing by a situation have no idea what's going on inside the situation. I'm guilty of it, I know I am. I've seen kids acting abominably, and thought, 'I'd never let my kids away with THAT!' I've seen parents acting abominably, and thought, 'That is just awful. What kind of parent does THAT!' But who am I to judge? Have I never flown off the handle with my kids and done things I regret? Have my kids never flown off the handle and embarrassed me to no end? Now, add a bit of autism to that, and imagine what both the child and the parents are trying to deal with. In public, sometimes, no less.

Like I said, I'm no expert. I'm just someone who wishes the world understood autism just a tiny bit more. I don't mean scientifically (though I wish that too); I mean the world, as in everyday people. Imagine how you feel on those days when nothing goes right, everything you've planned gets turned upside down, you are getting frustrated, angry, and feel you are spiralling out of control. And then you try to speak to someone, and they tell you to just 'calm down', they dismiss you or they simply just don't understand your feelings at all. Or worse, they criticise you for your feelings and actions. Now take that bad day, and squeeze it into the mind and body of a small child who doesn't have the maturity of an adult with which to reason the whole situation out. Now multiply that by any number, large or small.

I imagine that's how it must feel for an autistic child. All the time.