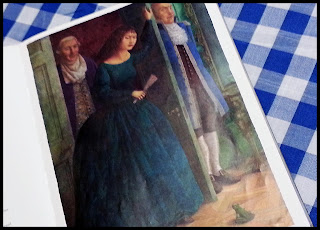 While driving in the car today, Fifi spotted a tall tower beside the road.  'Look, Mum! A tower!' she cried as we passed by.

'Do you think there's a princess in it?!' exclaimed Lolly.

Chuckling, I said no, it was a power station, or something like that, and without much thought added, 'Too bad there isn't a princess in it, though, or we could've stopped to rescue her.'

Fifi frowned.  'No, we couldn't.  Only Daddy or Jaguar could.'

Then it was my turn to frown. 'Why? Because they are boys?'

'Yes, only boys can save princesses from towers,' she declared.

Disturbed, and actually a bit annoyed, I replied, 'Not true.  Girls can rescue princesses from towers too.  Girls can do all the same things boys can do.'

This elicited protests from both girls.  They argued that boys were stronger, could fight dragons better, and were better fighters in general.  And furthermore, they said, only boys can go to war.

I felt a bit perplexed.  Here all this time, Scott and I thought we'd been teaching the girls gender equality, but it appears Disney got to us first, and it's message was much clearer; girls need rescued, and boys are the rescuers.

I explained how girls can do anything boys can do.  We can be trained to fight.  We can be engineers and build things that work.  We can be scientists and explorers.  We can go to war if we want.  I began giving real life examples of friends who do all these things, girl friends of mine in the army, female family members who have fought in wars, girls who are engineers.  I stated that they should never let anyone tell them they can't do something, especially if it is because they are girls.  I tried to convince them of all this but doubt it will stick.  The whole world illustrates the point much better that girls are weaker and less able; who is boring old Mum compared to everyone and everything else?

We've always told the girls they don't have to get married if they don't want to.  We've always told them if they want boyfriends, they can have them as long as the boys don't make them want to change who they are.  We've told them they can do whatever job they want and can be whatever they want when they grow up.  We know these are discussions that will be had a million times over. I just never realised how much we were missing this point, that girls are equal to men.

By equal, incidentally, I don't mean the same.  To say we are the same is patently not true.  But we are of equal value, balanced perfectly on the scales of human worth.  We are able to do all the same things as each other, though what comes easily to one person may require more effort from another.

But this is obviously not the message that is reaching our kids. It's a seemingly impossible uphill battle to fight, when, even now in 2013, we still have films being made for kids that show helpless girls being rescued by strapping boys, and as they get older, films and magazines showing them how to get boys and how to be prettier, and as they get older still, everything in their whole world telling them how to work in a man's world and be like a man to get ahead.

And what's worse?  Women are doing this.  It's not just the men.  There are all these women in film, print, children's books, cartoons, advertising, and so forth, who are consciously perpetrating this concept that if girls want to be anything they either need to 1) be pretty/cute/sexy about it or 2) do it like a man.

There are so many directions I could take this and so many arguments that could be tackled that would take all night, but I just want to say this.  Somehow, somewhere, in this forever misogynistic world, there has got to be a way to get my girls to realise they are capable of achieving everything they put their minds too.  They are not just as good as men, which implies men are the gold standard; they are simply just as good as they desire and aim to be.  Yet the phrase will crop up again and again: You can do anything a boy can do.

(And what's it going to be like for Jaguar?  It's not just a problem for girls.  Soon enough I'll discover the gender inequalities for my son too - schools being geared towards girls' style of learning and ways of thinking, boys being criticised for acting like boys... really, what is wrong with our society? Will we ever evolve?)