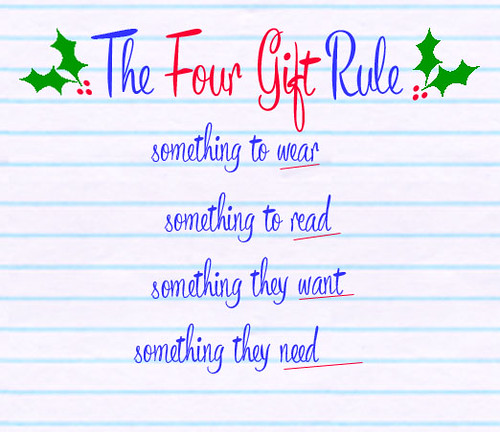 My first response to this meme was, "Great. Another source of mompetition." I could imagine moms boasting about how little they spend on their kids at Christmas, how unmaterialistic their families are, how their kids don't EXPECT tons of presents like all the other spoiled brats in the Western Hemisphere.

I also recognized how this could be a great system for families on a budget or for families who genuinely and un-boastfully do practice simplicity and minimalism.

But it still annoyed me.

I even saw one comment that added to the mompetition wars that flaunted how incredibly goodly (and godly) she in particular is:  "We actually add one more category - something spiritual." I could practically hear the slot machine ding-ding-ding as she won that round of supermoming the rest of her opponents.

After my initial annoyance, I started thinking about the basic concept of the meme, and I kind of have to admit - I didn't hate it. In a self-loathing kind of way, I actually sort of liked it. I started thinking a lot about it and dang it, it wasn't a bad idea at all.

And even more self-loathingly, I also didn't hate the concept, albeit fairly pretentious, of "something spiritual". In fact - as I control the gagging - I was a little inspired.

Since losing all faith in a supreme being, I have definitely "shut down" any spirituality that might have been lurking. For me, religion and spirituality have always been all or nothing. As an evangelical Christian, I believed in One God, One Jesus, One Faith (One Baptism, etc). It was all or nothing. You either believe whole-heartedly that Jesus is the only way to salvation or you are lost. (Hellbound.) God isn't interested in lukewarm believers! He'd rather you be hot or cold.  (Revelation 3:16 - "So, because you are lukewarm, and neither hot nor cold, I will spit you out of my mouth." ESV) Evangelicalism leaves no room for wishy-washy, fluffy-wuffy, when-it's-convenient faith. So when I went from being hot (a devout follower of Christ), I bypassed the lukewarm and went straight to cold. None of that "I'm spiritual but not religious" mumbo-jumbo could suffice for me.

You're either hot or cold. It's all or nothing. You're one or the other. That's how I was brought up. I became the other. The cold. The nothing.

And truth be told, I'm cool with that. ("Cold" with that, perhaps?) I don't really miss "spirituality". I don't really feel I need it. Right now anyway. I will concede that perhaps that may change in the future.  A belief in a god is unlikely, but a yearning for spirituality, I suppose is within the realm of possibility. Just not any time soon.

My friend Devon asked me about this. If instead of settling into a sort of "liberal" Christianity, one that perhaps doesn't believe in hell or who accepts gays, I retaliated against my faith and went as far to the other extreme as possible. In answer to that, yes. Probably. Christianity has always been all or nothing for me. If one takes the Scriptures literally, those two are the only options. To take Scripture non-literally seems to devalue and discredit the whole thing. (Where does the literal end and the metaphorical begin? At creation? At the virgin birth? At Christ's diety?)  Perhaps if I'd never been so hot about my faith, I might have settled for lukewarm. But that's not really a viable option. (And it hardly matters at this point when I have zero belief in any god anymore anyway.)

But back to Christmas presents. (I kind of chased after a rabbit there for a minute.)

While I personally do not feel a pressing need to reconnect with my spiritual side, that does not mean my kids should be deprived of it. Perhaps "something spiritual" isn't all that pretentious after all.

(No. It's still pretentious.)

The question then is, what is "spiritual"?

If you do a quick Google search for "spiritual", the first several pages gives you all kinds of Christian links. A search for "spiritual gifts", once you sort out the quizzes to find out if you are discerning or a peacemaker, brings up hundreds of Bible retailers, Precious Moments figurines, inspirational Bible verse calendars, Christian jewelry, and home decor crosses.

I just have a hard time understanding what decorative crosses and Precious Moments actually do to bolster one's spirituality.

Spirituality has been very much equated with Christianity in the West, and to buy someone a spiritual gift is basically synonymous with kitschy ornaments and wall hangings that have some sort of vague Biblical reference. Even when I was a Christian, I wanted to know exactly how a pack of Testamints was going to do anything to improve my life other than promise me fresher breath. (In fact, those sort of things deeply offended me, as they should any devout believer. Chocolate crosses at Easter? Seriously?!)

To me, spirituality is about connecting with ones deepest self or connecting with nature or the universe or even a supreme being. If I want to give my kids an opportunity to connect with their spirituality (whether I believe in such a thing or not), I need to first pinpoint what that even looks like.

Choosing something to wear, something to read, something they want and something they need is easy.  A new outfit, a new book (or several - I'm not committed to just four gifts), a glance at their letters to Santa, and new packs of underwear doesn't take a whole lot of contemplation. But something spiritual requires a lot more thought. A lot more introspection too.

What would I consider spiritual? Putting aside my own skepticism, I have to wonder what I think would allow them to connect with themselves or with nature or with the universe or with a supreme being.

Not being a super spiritual person now, that's hard.

But I can think of a few things that could open one up to spirituality.

Admittedly, packing "poetry" or "meditation" into a cardboard box and wrapping it in festive paper isn't really very practical. And trying to excite a six year old into spiritual rapture with a Mozart sonata or the works of John Donne would probably fail miserably.

But all children can start exploring spirituality with creation. Creating their own art, their own poetry, their own music, their own homegrown nature.

The tools for creation - paints, paper, an instrument - are things one can wrap up and put under the tree. These are a "something spiritual" that can be given to children as a holiday gift. And if choosing something that relates to a supreme being is important to you as well, encouraging your children to use these tools as a means of worship must be more spiritually satisfying to them than buying a white and pink Bible (that they are too young to read) or a gold cross necklace that is simply worn as an accessory.

I mean, if we're going to be so pretentious as to add a "something spiritual" to our list of Christmas presents, let's go all out then, shall we?


READERS: What do YOU consider spirituality to consist of, and what would a "something spiritual" look like under your Christmas tree?
Posted by Lori Arnold at 11:16 PM
Email ThisBlogThis!Share to TwitterShare to FacebookShare to Pinterest
Labels: atheism, balance, children, Christmas, faith, kids, life, parenting, poetry, religion, simplicity, supermom, theology