Syrian Refugees Not Welcome in Arkansas

A little story. (Not the sad part.)

A colleague of mine who didn't realize that I'd actually lived in Scotland myself (and hadn't simply married a Scottish guy) was surprised when I said I'd move back to Scotland in a heartbeat if the economy here in America wasn't so amazing. She was genuinely shocked.

I said, "I know some people find that hard to believe."

She responded, "I do. I do find that hard to believe."

I may be generalizing, but in my experience, it seems people who have never lived outside the US have no concept of how great we have it here. Yes, there are some major problems, but generally speaking, America is incredible. We have wealth, we have land, we have a stable government.  I also recognize there a myriad ways our nation could be improved. But regardless, at the risk of sounding 'Murican, we have a great nation.

People here complain about the economy, immigration, taxation, welfare, and just about everything. I don't blame anyone for that either. There are problems with all of these things that need to be fixed. However it seems that those who have never lived anywhere else have very little frame of reference to see how good we have it here. 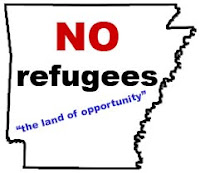 Now, onto the sad part.

The United Kingdom, which is about the size of Oregon, has said they can handle about 20,000 more Syrian refugees over the next five years. (And many British people believe that is nowhere near enough.)  Meanwhile Germany has said they will be able to accommodate 500,000 Syrian refugees every year for the next several years.  Germany's population density is roughly 609 people per square mile without the projected half a million refugees expected each year for the next several years.

So we have plenty of space. Space clearly isn't the problem.

Security must be the problem. The US is worried about security and rightly so. Of course, obviously, our government wants to keep the country and its people safe. So to do just that it has created (and is constantly refining) a very robust vetting process for refugees - Syrian ones especially.

According to this article from CNN,


Several federal agencies, including the State Department, the Department of Homeland Security, the Defense Department, the National Counterterrorism Center and the Federal Bureau of Investigation, are involved in the process, which Deputy State Department Spokesman Mark Toner recently called, "the most stringent security process for anyone entering the United States."

These agencies use biographical and biometric information about applicants to conduct a background check and make sure applicants really are who they say they are.

The applicant is interviewed by a DHS officer with training in this screening process as well as specialized training for Syrian and Iraqi refugee cases.

And refugees from Syria actually go through another layer of screening, called the Syria Enhanced Review process.

"With the Syrian program, we've benefited from our years of experience in vetting Iraqi refugee applicants," a senior administration official recently told reporters. "And so the partnerships we have today and the security checks we have today really are more robust because of the experience that we've had since the beginning of large-scale Iraqi processing in 2007." (emphasis mine)

So Syrian refugees are among the most and best vetted of all foreign nationals entering the United States.

While I'd like to say, "we can never be too careful", something about that sticks in my throat. Is it possible actually to become so "careful" that we lose sight of the reality baring its cold, starving nakedness right before our eyes? Can we use national "security" in the same way we use a "security blanket" - a place we can hide our faces from the things that scare us or make us uncomfortable?

It also concerns me that we have targeted one particular race of people to exclude from our compassion and humanitarian care.  Is it right to refuse an entire demographic from relocation in our state or country based almost solely on their country (and religion) of origin? Are we equally scared of refugees from other war-torn nations? Are we pinpointing a people group because of their religion? (If these people were coming from predominantly Christian nations like Kenya or Croatia, would we feel as terrified of letting them in as we are of people from a Muslim one? It's an honest question.)

Furthermore, can we actually become so careful and so fearful that we lose our compassion and empathy for the human race? Can we seriously see images of dead toddlers and not want to do something significant about it? Can we see millions of people fleeing their homes to escape rape, murder, kidnappings, and starvation, risking everything just for the hope of reaching safety and not feel the desire to offer substantial help?

Can't we see that we are a country with significant wealth and land to share with those who have nothing - quite literally, nothing? Alongside our "most stringent security process", surely we can afford to show genuine humanitarian concern for those who are in most unfathomable need. Surely as one of the richest nations in the world we can feed the hungry, clothe the naked, shelter the poor. Surely.


Today I feel sad. Today I feel helpless. Today I feel confused by all the voices rallying against helping their fellow man (and woman and child). Today I feel small and powerless when looking up at the giants of governors and governments who make all the rules. I don't understand why we are so afraid. Today I feel I have nothing to say that hasn't already been said by countless others greater and more powerful than I.

But silence is acceptance. So instead of silence, I lift my small, insignificant voice as high over the crowds as I can to remind us all that we are a great nation with resources to spare. Please, can we do something that will cost us so little yet will affect the world so much? Please, can we confront our fears and bravely open our arms to welcome the children, the families, and yes, even the single men, into the safety of our abundance?

"To whom much was given, of him much will be required."
Posted by Lori Arnold at 10:16 PM
Email ThisBlogThis!Share to TwitterShare to FacebookShare to Pinterest
Labels: Arkansas, concerns, fears, love, politics, religion, society, USA