I have come down with The Plague. I blame it on the rats (aka, the children).

Jaguar was all out of sorts yesterday, and we realized his nose was really runny and he was rubbing his ears and eyes all day. We figured he was coming down with something. And then, like that, I started sneezing. My head started throbbing. My throat got scratchy. My ears got sore. I went to bed early and woke up repeatedly to blow my nose all night. I woke up feeling like my head was going to explode like an overfull balloon filled with firecrackers (because you get those). Scott made me a cup of tea before heading off to work. Lolly made me bacon, which I couldn't possibly eat. I had to drag myself out of bed and be a parent regardless, so I got as far as putting bowls of cereal out for the kids and settling in on the couch with my laptop, phone, book, box of tissues and cup of tea.

Unfortunately, I can't stay here all day. Jaguar has his two-year-old well check visit at the doctor (this WCV thing is so weird and new to me) this morning, and I have to work tonight. Hopefully in between doctor and work, I can get some snoozy time on the couch in while I plonk my kids down in front of hours of Netflix.

The good thing is, if my appetite remains nil, I might lose a couple extra pounds. (The bad thing is I'll gain them back when I'm better.)

People who work outside the home get to call in when they are sick and nurse their pitiful selves in bed all day. Stay at home mums get to just keep working in spite of it all. Where's my sick day?! 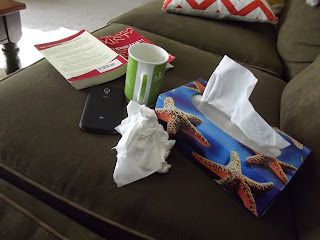 In other news, my blog has reached 100,000 pageviews! This is actually a pretty small number considering I've been blogging here for ten years, but I'm still proud. Also, according to my stats, the only thing my readership enjoy reading about more than my religious failure is frobscottle and weddings. Interesting. Must write more about frobscottle and weddings. 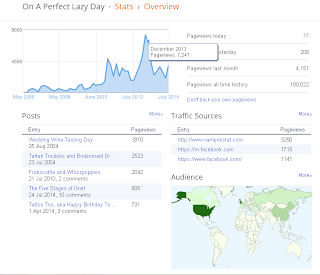 And finally, since my skull has been stuffed with tissue paper like a new shoe, leaving me unable to put together coherent thought, I leave you with a song. A serious song. A song that sums up in a lot of ways (but not every way) my experiences with Christianity of late. A song that used to make me so sad I cried every time I listened to it, but now makes me feel triumphant and teary in a good way. Especially the last line - "And there's nothing inherently wrong with us!"


Quiet Company, "The Black Sheep and the Shepherd"

But I lied, and I knew I'd lied, but I did everything I did to soothe the family pride and I just don't think I can keep it up now. Because I've never heard Jesus speak to me (not in any way that I'd consider speaking) but I bowed my head just the same. Though, I did find some tears when they played that song, but for the four right chords I will play along, I have always been that way. It doesn't matter what the lyrics say.

So I tried and I tried to achieve belief. Maybe there is something wrong with me, but I've been feeling fine (In fact, often better than fine.) Though, now both my shoulders have started hurting from walking around under such a burden, to reconcile everything that we learn with everything that we were taught. But with all we know now, how can you say "Oh you've just got to take it all on faith" and "Don't think too much. Just hush and pray, exactly as we've always done."

Sometimes I can't believe the things those preachers have the nerve to say to me, but maybe the things that I'd have to say to them are really just as bad. Because the only times I ever thought of suicide, I was waiting on the lord to direct my life, saying "give me one word and I'll put down the knife and I'll never pick it up again." But luckily I held out long enough to see that everybody really makes their own destiny. It's a beautiful thing. It's just you and me, exactly where we belong, and there's nothing inherently wrong with us.

-We Are All Where We Belong

Posted by Lori Arnold at 8:40 AM
Email ThisBlogThis!Share to TwitterShare to FacebookShare to Pinterest
Labels: life, religion, sick as a dog, updates