[Full disclosure: I am employed by the American Red Cross.]

I’m not a numbers person. Once you get past totals I can visualize – 20 or 50 – I stop comprehending the scope of what large numbers are meant to represent. So when I report that to date the American Red Cross has served over 3.8 million meals and snacks to victims of Hurricanes Harvey, Irma and Maria*, all I know is that’s a lot. But I can’t really process what that looks like. I don’t think any of us can.

Last week I spent 9 days in Ft Myers, supporting the Red Cross relief efforts in Southwest Florida after Hurricane Irma made landfall on September 10th. I spent a lot of time tracking down daily stats like “over 1 million overnight stays in shelters” and “provided more than 118,000 mental health and health services”. I knew our 4 large-scale outdoor kitchens that we run in partnership with the Southern Baptist Disaster Relief were turning out “tens of thousands of meals a day”. I could see the enormous ovens cooking giant vats of mashed potatoes and green beans, and I could certainly smell the tantalizing scent of roast beef from the McGregor Baptist Church parking lot, where Kitchen 2 was set up. Kitchen 2 had the capacity to produce 20,000 meals per day. That sounds like a lot! But even seeing the hundreds of red cambros, the insulated boxes that keep the food hot for hours at a time, lined up on pallets in front of multiple emergency response vehicles (ERVs), I still couldn’t visualize what kind of number we were really talking about.

While in Ft Myers, I ran into another volunteer from my home region, Oklahoma-Arkansas. Rick Umstead had deployed to Ft Myers as an ERV driver. His job was to serve lunch and dinner to neighborhoods that were significantly affected by Hurricane Irma. He and his partner Dave from Colorado would arrive at Kitchen 2 around 8am and give ERV 2121 a good clean – mopping, disinfecting, tidying and restocking supplies like plastic cutlery and “clamshells”, the Styrofoam boxes used for handing out meals. Around 10am, the ERV drivers would begin loading their trucks with cambros for lunch, enough food for about 500 meals per ERV. They would then drive off on their respective routes, whether to neighborhoods identified as needing assistance or to one of the many Red Cross shelters being managed in Southwest Florida. Rick and Dave would deliver their 500 meals and would not return to the kitchen until their cambros were empty.

By the time Rick and Dave returned from the lunch run, usually around 3-3:30pm, it was time to unload the empty cambros and reload the truck for dinner. By 4 or so they’d be back on their way again, serving another 500 meals, often not returning until 10 at night. Upon return, they unloaded the empty cambros again, cleared out the ERV, and headed off to bed, knowing the next day they’d be back at the kitchen at 8am, ready to do the same thing all over again. Kitchen 2 had at least 6 or more ERVs in operation every day, with at least two volunteers per vehicle. Rick and Dave, like many other ERV drivers, had committed to spending two weeks in Ft Myers doing this work. Some volunteers committed more.

To me, 500 meals twice a day per ERV sounded like a lot, but how many meals is that really? I got to find out on Thursday, when I asked them if I could join them for their dinner routes. “If you ride with us, we’re putting you to work!” they said. And that’s exactly what I intended to do! 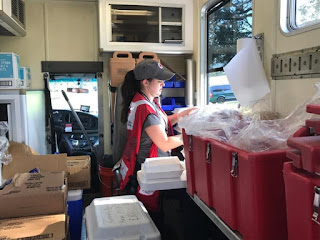 I rode in the back of the ERV in the seat by the serving window. (It has a seatbelt, in case you’re wondering.) We drove about half an hour away into a neighborhood in Lehigh, where we began our slow progression through the neighborhoods, beeping the horn and calling out over the loudspeaker, “Red Cross, food and water! ¡Comida y agua!” I put on a pair of clean plastic food handling gloves to serve the clamshells and bottles of water out the window, while Rick filled each compartment with food and handed the clamshell to me to finish and close. After a short while, we got a system going – he’d spoon out the main meal items, pass the clamshell to me, and I’d add the condiment packets, cutlery packets and dessert, then pass out through the window to families who came out of their homes – most still without power and many damaged by fallen trees and hurricane-force wind – to get a free, hot meal and a cold(ish) bottle of water.

I was struck by the various reactions of the people we served. Some were hesitant to accept a free meal, as if not sure it was really free. A few people shared their stories with me, and a few even cried as they thanked us. Many were modest and only requested meals for their children, not themselves. Some thought they had to pay us. Many families only spoke Spanish in this neighborhood (while in other neighborhoods, there would have been many Creole speakers too), so I learned to say things like “¿Cuántos?” (“How many”?), “Es gratis” (“It’s free”) and “Tenemos mucha comida” (“We have lots of food”) to explain that there was plenty for the adults in the household too. I quickly learned to trust my instincts and insist sometimes on handing out the extra meals and waters to those who would rather go without than appear greedy. Some felt they needed to explain why they were needing more meals than it appeared they should. I told them we’d give them whatever they needed. All were grateful. 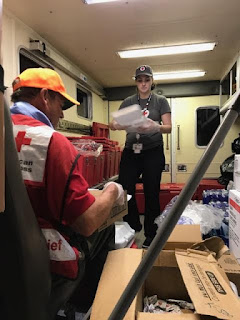 After handing out what felt like at least a hundred meals, I looked at the clock. We’d only been at it for an hour. There were still five cambros of food left, and we were nowhere near done. We had only hit less than half the neighborhood, and it wasn’t the only neighborhood on our route. I continued to add the condiments, cutlery and desserts to clamshells and hand them out the window for another hour or so. Then we swapped jobs, and I began ladling out the food. Trying to get the proportions right ended up more an art than a science. I wanted to make sure we had enough to complete all 500 meals but not be so conservative that the meals were skimpy and we’d end up with anything left over. I filled clamshell after clamshell, each time trying to get it just right. It was tiring work!

Though it was getting dark, we didn’t want to leave any neighborhood until we were sure everyone had been served. We ended up finishing our routes a little earlier than Dave and Rick had the previous nights; having an extra pair of hands seemed to help move the process along a little faster. We finally returned to Kitchen 2 a little before 9pm to unload the empty cambros, clean the serving utensils, through away the trash and get ERV 2121 ready to do the same thing again the next morning.

500 meals suddenly had real meaning to me. It’s a lot. And that was only dinner; Dave and Rick had already served another 500 lunches only hours before I joined them and had been at this already for seven days straight. Their next day was to be their first day off since arriving in Ft Myers.

Like so much in disaster relief, nothing is as simple as it appears from the outside. “Tens of thousands of meals a day” is a lot, but what gets lost in those grandiose numbers is the individuality of where each of those meals went. Did seven meals go to a family of migrant workers in Bonita Springs who had been without air conditioning or refrigeration for almost two weeks? Did four meals go to a single mother and her three small children sleeping in a shelter in Immokalee after their home flooded? Did one meal go to the lady who was scheduled for a lung bypass surgery just days after the hurricane hit and now had no power in her home? Did three meals go to three children while the parents watched hungrily on, afraid to ask for the extra two meals to avoid taking too much?

And what about the volunteers? When we say there are more than 2,380 volunteers responding right now to Hurricanes Irma and Maria, we lose the individuality of each volunteer and what they gave up to be there. Some are retired and have left their spouses, grandchildren and perhaps ailing parents for two weeks. Some requested PTO from their employers to spend their vacation time volunteering. Some, like me, left small children at home with the other parent or with another caregiver to spend time serving in the disaster zone. One man I met runs his own business and turns down contracts during hurricane season so he can spend most of the late summer and fall months responding to disasters. Each volunteer that deploys to work on a disaster relief operation works late hours for days on end fulfilling their small part of the bigger Red Cross mission to alleviate human suffering in the face of emergencies. Sometimes those jobs are tedious; sometimes they are frustrating; sometimes they don’t go as smoothly as we’d like them to. Sometimes, those jobs are emotionally overwhelming, seeing from the ground level just how enormous the needs are. For me, seeing the flooded and storm damaged homes in person, talking to the mother whose young family has suddenly become homeless, holding the hand of the elderly lady as tears fall down her cheeks, or handing the bottle of cold water to the child whose eyes glitter with gratitude made very real and personal the disaster I’d only experienced through segments and soundbites on the evening news.

Big numbers serve a purpose. They illustrate to donors where their money is being spent. They quantify the work being done on a large scale. But they miss individuality of each person served, each person who received one of those 3.8 million meals or who slept in a cot during one of those 1 million overnight shelter stays. Disaster relief is complex, much more so than I’d ever realized before, and sometimes the response feels like more of an art than a science. Focusing on statistics with big numbers makes it easy to ignore the complexity or forget each individual who receives one of our services. But what I realized during my short time in Ft Myers is that what matters most to the people we serve is that someone showed up during their darkest hour and provided that meal or that shelter to sleep in or a hand to hold, and that is something that the Red Cross can’t measure in numbers. 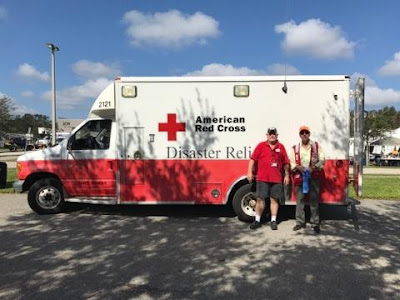 *All stats referenced are actual Red Cross service delivery stats as of 9/24/17.

This story is cross posted on the Arkansas Red Alert and Oklahoma Red Alert blogs.

Posted by Lori Arnold at 10:20 AM
Email ThisBlogThis!Share to TwitterShare to FacebookShare to Pinterest
Labels: Red Cross