Since January, my life has pretty much been doing somersaults all the way through the calendar. (How is it August already?) It's been the rockiest year of my life, but in amongst my marriage ending, my job role change and the transition into single motherhood, I've also done a couple of pretty awesome things. I just never got around to blogging about them. So tonight, I bring you The Awesome Stuff I've Done So Far in 2017: Part 1. In the next couple of days I'll bring you Part 2. 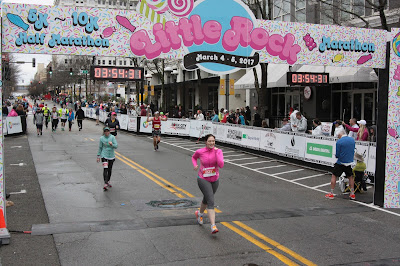 Part 1: The Little Rock Half Marathon

Many years ago while working at the High School of Glasgow, I decided I was going to start running, because why not? My coworker Carol and I started running during our lunch breaks. We'd change into workout clothes and run a few miles around the block - or rather, Carol ran a few miles, I ran a few feet, panted heavily, walked a few miles, then ran a few feet again. (Once, we somehow managed to get lost running around the block and were almost an hour late getting back to work. To this day, I'm not sure how that happened.) That eventually tapered off though, perhaps when I got pregnant with Fifi. I can't remember exactly. I only know that it was many years later before I got the notion to run again. This time Jen from church and I decided we were going to train for a 10k. We started out strong, running around Battery Park a couple nights a week. Until the first night it was cold and rainy. And here I'm going to go ahead and make the assumption that this means we only actually ran around Battery Park two or three times tops before encountering a cold and rainy night ... because Scotland.

That was the extent of my running career.

Then last year, my dad, whose enthusiasm for running and cycling is somehow oddly contagious, persuaded me to sign up to run the Little Rock half marathon with him. In fact, it was about this time last year. I figured I had more than enough time to train, so sure, why not? I mentioned it to another friend of mine, and she agreed to register too. Feeling motivated, Elizabeth and I started running together. But not for long. Winter came, and I didn't want to run outside. I ran on the treadmill at the gym, but I didn't do much else in the way of training.

Then Scott and I split up, and training for a half marathon was the furthest thing from my mind.

I had gotten to the point where I could just about do 5 miles before wiping out, so when March came along, I had thoroughly decided against running the race. Elizabeth's training hadn't come along much better; I think she could manage about 6 miles. So the week the runners were supposed to pick up their race packets, Elizabeth and I decided we weren't going to run after all. But since we'd already paid for the t-shirt ... well, we could at least go pick up the packets.

On Thursday, Elizabeth texted me to say she was going to go ahead and do the half marathon after all. She used some fancy mathematics to show that we could totally complete the race within the 4 hour time frame, and, well, math not being my strong suit, she convinced me to go for it too. So on Friday we picked up our packets and on Sunday, having not run in months, I found myself at the starting line of a 13.1 mile race. In the rain.

We started off great. The excitement and the adrenaline kept us going for the first few miles with no worries at all. We paced ourselves well. We cheered when we passed mile markers. We walked some and ran some. (We made sure we were running every time we passed a race photographer.) The rain wasn't going to spoil this for us. 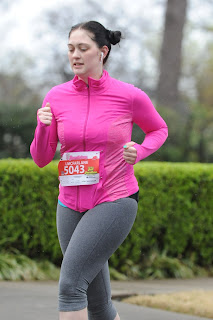 5 miles in, I felt great. 8 miles in we were still going strong. 10 miles in we were still in this thing, though getting tired. Then suddenly ... I felt it. The next 2 miles were tough. My feet were soaked and blisters were forming. I was getting exhausted, but mostly it was my feet. Then that last mile was torture. My feet were killing me. We were really watching our time by then, coming close to the 4 hour cut off. We knew we could make it if we could just keep up the pace, but my feet!

We turned the last corner and could see the finish line about 4 blocks away. Elizabeth and I looked at each other. We had time. We could do this. Let's do this! Determined to run, not walk, across the finish line, we picked up our pace about 2 blocks away and just went for it. We weaved in and out through the walkers in front of us, like we'd been running all along, and with 15 minutes to spare*, we crossed the finish line.

During mile 13, we walked with a man who had been doing the LR half marathon for something like 15 years with his friends. He said the feeling of crossing the finish line is like no other and don't be surprised if you cry.

Yeah, right, why would I cry? But sure enough, as I crossed that finish line, the emotions welled up in me, and my eyes started to tear up. The past three months had been worst of my life. My marriage was a failure, I was barely holding it together as a single mother, and most days the best I could do was pull myself out of bed to show up for work on time. I was so depressed, and all I wanted to do was drive my car off the side of bridge and put an end to it all.

Yet there I was, finishing a half marathon. I have never in my life felt stronger. There is no describing the feeling. It was one of the most empowering moments I've ever experienced. 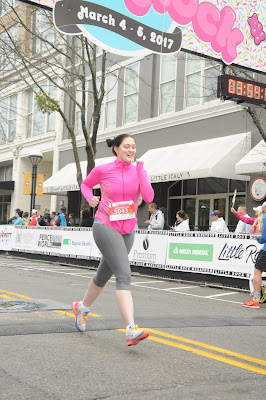 Aaaaand then the adrenaline wore off and OH MY GOD, MY FEET.

Elizabeth and I limped to the runners' area where I scarfed down a banana, an applesauce and the best tasting pasta of my entire life. The thought of walking back to the car was unbearable, and the walk actually was unbearable. I drove home, took a hot bath, and napped for several hours, waking up stiff as a board and unable to move from the neck down.

But it was so unbelievably worth it.

So worth it, that I'm signing up again for next year. This time though, I think I'll train first.

*For those who may wonder: The timer in the first picture makes it look like we came in only 6 minutes under time. That was the official clock. I was 20,000-odd people behind the first runners, so my time didn't start until I crossed the starting line.