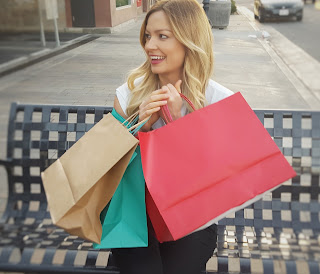 Hello, my name is Lori, and I'm a shopaholic.

I love shopping, any kind, anywhere. Grocery stores, big box stores, boutiques, bookstores, malls, Amazon. My sister-in-law even took me into a tractor store once, where I discovered how badly I wanted to buy a chicken coop. When I have had a stressful day, my therapy is retail therapy. It's a weakness, a flaw, a sin, but I am hopeless. Every pay period I vow to do better, then a new pair of shoes calls to me or Terry Gross reviews an author of a new book or Facebook tries to sell me a Bernie Sanders action figure. (I have almost bought that so many times.)

In 2013, I started the September Shopping Challenge to help me learn to curb my spending and control my budget. We had just moved back to America, Scott had just started his new job, and we were at the start of trying to rebuild our lives. We had no furniture, no car, no books or toys, just the suitcases-worth of belongings we'd brought over from Scotland. I started the challenge to help me manage spending in those early, stressful days.

Each year, I come up with new SCC rules to help guide me through the month and to outline areas I need help with my habits.  They usually involve only going shopping once a week and making lists and sticking to pre-planned menus, schedules and budgets. Then I add any other rules or exceptions that I feel are needed to make the month successful.

You can read about the origination of the September Shopping Challenge, the first year executive summary, and the second year's game plan for a little more background. Here are some helpful lists. If after reading this, you think you'd like to join me in this challenge, leave a comment (with your blog if you plan to blog about it!) and we'll keep each other motivated.  How does that sound?! (Ridiculously fun, y'all, for real. We could start a Facebook group and everything.)

This year, I have outlined the following rules.

1. Grocery shopping. We get paid every other Thursday, so the weekend is usually the best time to get the shopping done; however, usually by Wednesday, our kids (and my husband) have managed to eat everything in the house, so waiting until Saturday is almost always impossible. So in September, I will allow myself two grocery days a fortnight: Thursday (or Friday) after work and then Saturday or Sunday.  The in-between week will have one grocery day allowed for picking up any necessities we're running low on - milk, cereal, bread. Not brownies. No, Lori, brownies do not count.

2. Budgeting. We have a pretty well organized budget as it is, but we always try to leave a cushion which ends up being treated as free play money, not the cushion it ought to be. This September, that cushion will be filled with fluff and will remain fluffy. (Cushions, fluff, you get the metaphor. Give me a break. It's 9:30 pm, and I'm tired.) Regarding the budget, I will also make one other adjustment which I hope will become a permanent one. Knowing that we have that cushion money, every paycheck before I've had time to sit down and pay the bills and allocate the funds to the appropriate accounts (we have several actual accounts, like we're a family business or something), I have a bad habit of doing a little pre-budget spending. That might be getting pizza for dinner that night, ordering a book from Amazon I've been dying to read or buying something new for the kids.  My goal for this month is to do that little bit of spending AFTER paying bills and allocating funds.  That way I have a better method of tracking which fund or account that money came from. Was it from my personal spending money? Grocery fund? It needs to come out of something other than the cushion fluff.

3. Spending money.  Now that Scott and I are both working, we pay ourselves an "allowance" that is totally our own business. Scott does with his spending money whatever he likes and I do the same. The only problem is, I put the grocery money in the same account as my spending money, which often means the two get hopelessly intertwined. Some weeks I end up using my fun money on groceries or kids' needs, and others I end up taking a little out of the grocery fund to cover something for myself. This month, I'm going to keep a transaction record to keep the two separate.

4. No spend days.  This is the hardest part for me. I like to spend money. I like to shop. If I need to get away from life, I like to go to the book store and wander the aisles for hours. (And it's humanly impossible to leave a book store without a book or four.)  Online shopping has made this even worse. Why, just today, I was at a Women In Networking luncheon where the speaker, Emily Reeves Dean, was talking about her book that she self-published, and me being a big supporter of local authors and self-publishers, ordered her book from Amazon. Just sitting there, sipping my iced tea, I spent $11.99. So through the month of September, Monday, Tuesday and Wednesday will be firm No Spend Days.  Thursday or Friday and Saturday or Sunday will be grocery days, but only two of them, not three or four. The other two remaining days will be No Spend Days too.  If I want to spend my fun money, I will wait until one of the shopping days. The benefit of this is that I do not make tiny little purchases throughout the week that add up. If it's something I want badly, I'll still want it at the end of the week. If by the end of the week I don't want it anymore, then it wasn't worth buying to start with.

5. Exceptions. There will be one exception to all of this. Scott and I allow ourselves one evening a week to eat out unplanned.  This is usually on a day where work was exceptionally draining and neither of us want to cook. Lolly's soccer season starts back up in September too, so it might come on a night when we have soccer practice and did not get dinner beforehand. I will continue having this exception. It's needed for my well-being. It may fall on a No Spend Day, but that is okay, because this is the exception and comes out of one of our personal spending allowances. Either Scott will treat me or I'll treat him (and the kids, of course.)

So that's this year's September Shopping Challenge plan. Create your own plan or budget for the month and see what kind of savings you can make or good habits you can form! It'll be fun, I promise! (And by fun, I mean torture-but-worth-it-in-the-end.)