Things You Should Know About Me

Lately I've been wanting to dispel some myths about atheists. Since "coming out", I've had a few people seem, I don't know, uncomfortable maybe? around me. It's as if they don't know what to think of me anymore.  I began writing out some myths about atheists, but I soon realized that there is no way to categorize all atheists and what they are or aren't.  Just as you can't categorize all Christians in the same way, atheists, believers, and everyone in between come in all shapes, sizes and temperaments. Since it would be impossible to dispel myths about "atheists", I simply want to dispel some assumptions about ME.

1. I don't hate Christians. Or God for that matter.
I still have total respect for my friends and family, just as I always have. I've not always agreed with everyone on everything anyway, and I good-naturedly argued various points with them, but I've never hated them or what they believed, and that hasn't changed now. In fact, I still very much enjoy a good theological debate. If you want to talk to me about your relationship with God, I still want to listen. I still understand you and empathize with you. I've been there. Talk away.  And I don't hate God either. I just don't think there is one. I'm not going to start saying mean, insensitive, blasphemous things to you. I still ask my kids not to use the Lord's name in vain, because I know it's insensitive. I also don't insult Muslims, Mormons, or Jews for what they believe either. I don't hate any of you or any of your beliefs. I just don't believe the same things as you.

2. Similarly, I'm not just angry at God either.
Just because I don't believe in something doesn't equate anger with that thing. To use a very poor, inadequate example, I stopped believing in the tooth fairy once, but it wasn't because I was mad that she forgot to pick up my tooth (true story). I just started putting all the pieces together and realized my mom was the tooth fairy and I hadn't told her I'd lost my tooth. I know God and the tooth fairy aren't the same thing, but the concept still holds - disbelief does not equal anger.  While I might have once been angry at God (and I was), I did not stop believing in him just to get back at him.

3. I have not lost my morals.
Some of my ethical and moral philosophies have shifted, true, but that does not mean I am now amoral. Just because I no longer fear divine retribution or eternal damnation for wrongdoings does not mean I now give myself license to wrongdoing. I care about my fellow man. I care about my children. I care about my husband. I don't want to hurt people, not by stealing, gossipping, cheating or injuring.  My motivation for being good has always been personal, out of my own desire to be a good person. I used to also feel accountable to God for my actions. But without that accountability, I still have that same personal desire to be the best person I am able to be. And when I do mess up? It's not because I've "lost my way" and "turned my back against God". It's because I'm human and fallible, just like I was before, just like you are, and we all make mistakes, with or without a god.

4. I am not "militant".
I may talk about my non-beliefs to or in front of you, but I have no intention of "shoving it down your throat." Similarly, I have no desire to make you change your beliefs. In fact, that is very much NOT what I want to do. I know firsthand how painful the exit from faith is. I don't want to force that on anyone else. If something I say resonates with you, that's different, but it's not my intention to tear apart your faith in any way. Just as I don't regard you merely talking about faith as shoving it down MY throat, I hope you'll see that my talking about my experience is the same. The only way we'll all understand each other is if we listen to each other. When anyone starts getting defensive or offensive, the lines of communication shut down. I understand your need to talk about what matters to you. If my talking about what matters to me is upsetting to you, just stop listening. I'll never talk about it as a backhanded way of denigrating or criticising you.

5. My life is not meaningless and death is not hopeless.
If anything, I feel my life has more meaning now than ever before. Now that I realize this is my only shot at life, and there is no life hereafter in which to atone for my mistakes (and there is no God to fix what I've done wrong), I now live life a lot more intentionally and purposefully. I try to repair my mistakes myself, now, rather than leaving it up to God to rectify. I am grateful for every second I am alive in which to awe at the splendor of this universe.  I don't believe in eternal damnation or glorification. I wish, oh I definitely wish, that I could one day watch the continuation of life progress from my comfortable mansion in heaven, but knowing that I can't just means I must appreciate every moment of living now. As for death, I'm not going to pretend the loss of the heavenly concept isn't a bit disappointing (I really wanted to prove I'm right about so many things to Scott after getting to ask God), but it's not hopeless. My body will be donated to science to be practiced on by the nation's future doctors, and then I will return to the earth. It's kind of wonderous. My energy, whatever energy is left of me when I die, will return to the earth and keep the process of life moving on. I came from nature and will return to nature. I think that's fascinating.

6. I'm not trying to be edgy and trendy.
Far from it. I never wanted to be an atheist. I assumed all atheists were licentious, angry and intolerable. I'm still a little uncomfortable with the label. I could just do away with labels altogether, but at the end of the day, it does accurately describe my view of divinity. I was much prouder of my Calvinist label than I am of my atheist one. It's not about being edgy. I got over the excitement of rebellion sometime around the age of 19 (except for when it comes to my hair color, piercings and tattoos!). That's about the extent of my edginess, says the girl with a Soccer Mom plate on her white minivan.

7. And finally, it's not just a phase.
I go through lots of phases: crafty phases, bento phases, pet phases, fitness phases. This is not one of them. I'll always miss certain things - the community of church, the comfort of believing in divine protection, the dream of an afterlife. I'll talk sometimes with longing about my past beliefs. But that doesn't make me a Christian in remission. I don't know for certain what the future holds for me, of course, but I'm pretty certain it doesn't hold a reconversion to religious faith. However, if you want to keep praying for me, I won't be offended by that. Prayers (honest prayers) come from a place of love, and whatever our beliefs, love is universal. I hope that our differences in religious beliefs won't displace love. 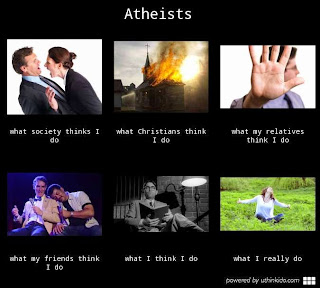