Lolly's a little uncertain about starting kindergarten next week. So I told her this story. 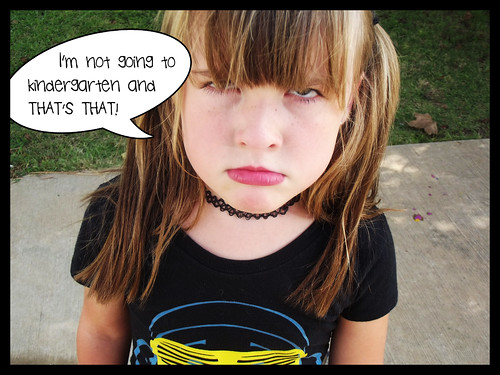 Once upon a time, there was a little girl called Lolly. She was getting ready for her first day of kindergarten. She was a little frightened. What if she didn't make any friends? What if her teacher didn't know her name? She didn't know how to read or add yet. She decided she didn't want to go to kindergarten after all. She hid her new Pikachu backpack and all her new school clothes under her bed.

The day before school started, Lolly said to her mummy, "I'm NOT going to kindergarten tomorrow."

Her mummy said, "But don't you want to go to school to learn to read and add?"

"NO!" she shouted. "I'm not going to kindergarten and that's THAT!"

The next morning, Lolly stayed in her pajamas. Her big sister Fifi ate her breakfast, put on her new school clothes and pretty new backpack, and got ready to go to school.

Lolly said, "I'm NOT going with you."

Her mummy sighed and said, "If you REALLY don't want to go, then you can stay home." Her big sister left without her.

Lolly played all morning, happy that she didn't have to go to school. After a few hours, she said, "I'm going next door to play with my best friend Brayden."

"But Brayden is at school," her mummy said.

Lolly frowned. Who was she going to play with? She realized she'd have to just play with her baby brother all day until Fifi came home.

Fifi came home after school full of excitement. She told Lolly all about her new teacher and all her new friends and how cool school is. She told her that Lolly's teacher had asked where she was and that all the kids wanted to meet her. "Don't you want to go to school with me tomorrow?" Fifi asked.

"NO! I'm not going to kindergarten and that's THAT!"

The next morning, Lolly stayed in her pajamas while Fifi got ready for school. Lolly played with her baby brother for a while, but he wasn't really very much fun. All he did was punch and throw toys. After a few hours, she said, "Can I go play at Emily's house?"

"But Emily is at school," her mummy said.

Lolly frowned. "Can I go play with Jonah?"

"Jonah is at school."

"Both of them are at school too," her mummy said.

This is rubbish, Lolly thought. There was no one to play with. Not any of her friends and not her little brother. She was bored.

In the afternoon, her big sister Fifi came home. She said, "Lolly, your new teacher wants to meet you! All the kids in your class want to meet you too! Won't you come to school with me tomorrow?"

"NO! I'm not going to kindergarten and that's THAT!" she said, but a little less sure of herself now.

The next morning, Lolly stayed in her pajamas while Fifi got ready for school. She quietly watched Fifi leave and suddenly felt very lonely.

She imagined Fifi at school, learning all kinds of new things. She imagined her own class learning how to do new things like read or add. And then she got scared.

"Mummy! What if all the kids in my class learn how to read and add without me?!" she cried.

"Well, if you want, I can help you read and add here at home, so you don't get behind," her mummy replied.

Lolly sat with her mummy at the table, while they looked at the alphabet, but Lolly couldn't help but be worried. She didn't want all the other kids to learn to read without her. She wanted to learn to read, she really did. Later Fifi came home from school and told her all about how much fun school was and didn't Lolly want to go with her tomorrow?

Lolly didn't say anything. That night she couldn't sleep. She didn't want to miss out on learning to read and add. She quietly got her new Pikachu backpack and new school clothes out of their hiding spot under her bed. She thought about school all night.

The next morning, Lolly put on her new school dress. She said to her mummy, "Maybe I'll try school just this ONE time." Her mummy said that was fine. Feeling a little worried and a little shy, Lolly left with her big sister to go to school.

When she got to her new classroom, she saw the nicest looking lady she'd ever seen.

"Why, hello, Lolly! I'm your teacher, Mrs Holland. So nice to finally meet you!"

Her teacher knew her name!

"Why don't you sit at this little table with these children?" Mrs Holland said, leading her to a table with five other little boys and girls.

"Hi, Lolly! Want to sit with us?" the little boys and girls said, and they pulled out a little chair for Lolly to sit on.

She ran home after school to tell her mummy what a fantastic day she'd had. She told her mummy all the wonderful things she'd done and all the friends she'd made and even showed her mummy a picture she had drawn.

"Do you think you'd like to go again tomorrow?" her mummy asked.

"Well, I'll maybe go again, just this ONE time," she replied. And she gave her mum a big cuddle. 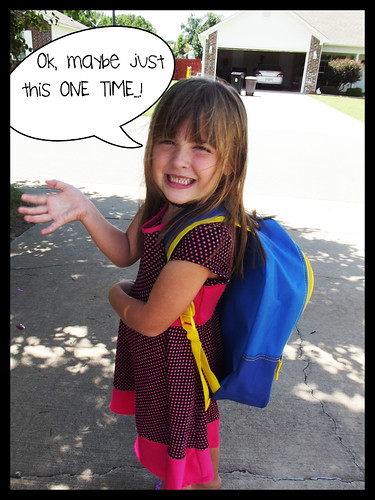