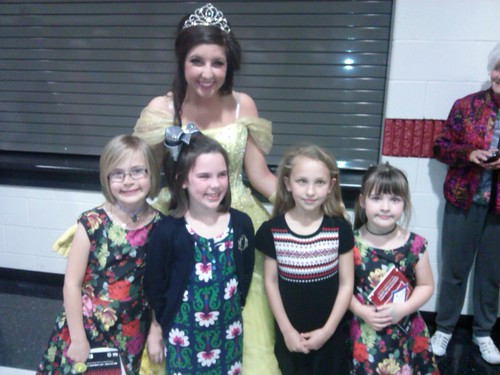 Last night, I took my two little girls to see Disney's Beauty & the Beast performed at my old high school. Though the Spring musical was held in the exact same fine arts building I used to perform in as a high schooler, the auditorium has been completely renovated since fifteen years ago into a genuinely exquisite theater.

My daughters and I, along with Devon and Liz, my two best buds from high school, and Devon's daughter, drove into the same parking lot I used to park in and walked the same footsteps I used to walk everyday into the building I spent my teenage life in.

The foyer is nothing like it was years ago, when the dingy carpets were brown and the three long steps crossing the foyer taking you up to the auditorium doors were perfect for sitting on to do homework or having gossip sessions, and the "box office" was just a folding table decorated with a plastic tablecloth. Now, there are real box office booths with glass windows for ticketing, and the building's structure is entirely different. Inside the auditorium, there is still the same incredibly large black stage with possibly the same red curtains, but the seats are now separated with aisles and rather than a couple of speakers and a light/sound board in the back row shut off with plywood walls, the sound booth is now a fully equipped media room in the balcony.

Despite looking so different, I was taken back years ago (when the budget was obviously not so generous), to the countless hours I spent practicing on that stage, watching performances in those seats, hall talks in those corridors and even a tornado warning lined up against those walls with books over our heads acting as very dubious protection should the roof by blown off.

My children, of course, did not have the same flood of memories. They ran around excited through the aisles to the seats we pointed them towards. Confusion and indecision broke out about who was sitting with whom, and we exchanged seats a dozen times before the kids were happy with their seating arrangements.

Mrs Tarvin - I'm allowed to call her Ashley now, even though it still seems a bit weird - said a few words before the play began. Ashley had been one of my Forensics coaches in high school, and hearing her speak, I still couldn't quite grasp the concept that she's not still my teacher.

The student pit band started up.

New memories rushed over me.

A few years ago, in Scotland, I asked my daughter's dance teacher about the local amateur dramatics groups, and how one gets involved. Scott and I had gone to the Arts Guild to see RENT, and I only discovered they were a local drama group when I heard the woman behind me say her co-worker was in the show. I realized then how much I missed acting and decided to find out more. Fifi's dance teacher, Linda, told me about a group that was soon holding auditions for Footloose, and I gathered up some (okay, a lot of) courage and auditioned. Little had I realized until that point just how much I had missed being on stage, and, well, that was me hooked. About a year later, the Greenock Light Opera Club (GLOC) did Beauty & the Beast. I had an absolute blast dancing around as a gold fork in some scenes, and singing savagely as an angry villager in others. 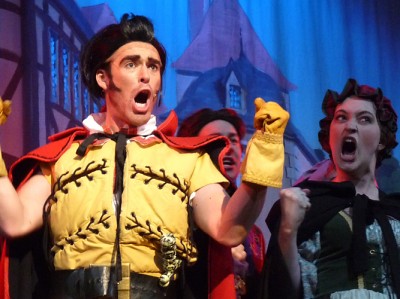 As the opening music filled the CHS theater, emitting from the same pit our fellow classmates used to play in, I was transported not only back in time but in space. I was in high school, I was in Scotland and I was right there with my wonderful daughters and friends, all at once.

The curtains opened and there on the stage was the Prince, being approached by the old peasant woman. (Considering I was half in Scotland at this point, I guess it might be understandable that my first thought was, "He's awfully young to be playing the beast." A second later I realized, um, that's because I'm watching a high school musical.) Moments later, the stage was fully lit with a lovely village set and villagers in fantastic costumes in a stage freeze. Belle appeared on stage. I had wondered previously what the standard of this show would be, seeing as they were all high schoolers, but as soon as Belle opened her mouth, I wondered no more. Her voice was beautiful, sweet but powerful. From the very start, I believed she was Belle and was immediately transported to 18th century France. My memories of high school and GLOC vanished. Aside from the instinct to sing where I had once been expected to sing, and in the first soprano parts, I forgot about myself and really enjoyed the show.

All of the characters were fantastic. Maurice, Belle's father was gentle and appropriately dopey-bizarre. Gaston was incredible - great voice and commanding presence. Lumiere and Cogsworth had the audience in stitches with their often off-script jokes. Mrs Potts was sweet and motherly and very endearing. The beast was frightening at first (my five-year-old jumped into my lap when he came on stage) but genuinely grew kind and lovable by the end. The enchanted objects' costumes were dazzling. The sets were effective and realistically Disney. The singing by all the main characters was beyond what I expected for a high school production, and many of them were worthy of far greater. The choreography, especially in the Tavern song, where they all sing about Gaston, was energetic and entertaining.

My girls loved it. Keeping them in their seats was a feat and keeping Lolly quiet was impossible. Lolly even cried at the end when the Beast was stabbed by Gaston. (Was that spoiler?) The girls said to me afterwards, "Thank you SO MUCH, Mummy, for taking us here!"

After the show, the kids raced around foyer getting photos with all the characters and autographs for their playbills. They were so excited, we could barely keep them all together! 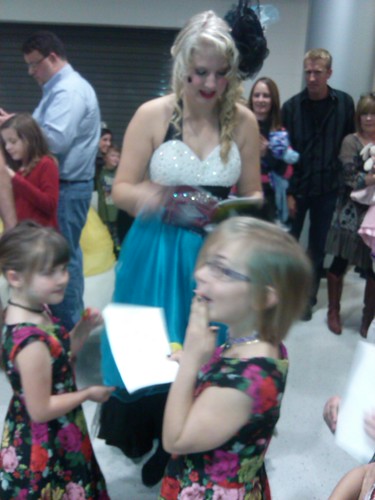 We then took the kids backstage - calling them VIP - but backstage was nothing like it was in our day. We opened the side door and found ourselves not in the short hallway separating the choir room from the two dressing rooms, but in a long school corridor with classrooms everywhere. A student, still in her actor's makeup but now wearing a Beauty & the Beast t-shirt, pointed us in the right direction. Soon, we found ourselves in that very choir room I knew so well, which still opened up into the wings of the stage.

More memories. This is where pre-show excitement electrified the air, where we were shhhhhhed a million times, where girls did the boys' make-up (especially the boys we liked), where twenty-second costume changes were somehow managed in ten. Many arguments broke out in that room, and so did many make-out sessions. It's a magical room.

We entered the wings and walked onto the stage. Devon joked that she could feel our stage ghosts, but silly as it sounds, I kind of felt we could. I saw myself fifteen years younger standing behind that red curtain, with the hush of the audience, the pit band playing, all of us making silent, exaggerated faces to warm up, noiselessly shaking out our hands and arms to build up the energy, and waiting for that breathless moment when the curtains would be pulled and the full bright lights would blind us and we would turn into fiction.

As I watched our kids run around the stage, making lots of noise, and trying to climb all over the set (which we put an instant stop to), I wondered what passions they will discover as they grow and what experiences they will remember years later. I wondered where each will end up, and if they will have high school memories worth returning back for.

I may find it extremely difficult being back in my home town again after so many years away, but one thing I can say without reservation is that I have a lot of great memories of this place that have been worth revisiting.