"On A Perfect Lazy Day" Indeed

Scott and I have worked out a pretty good system, since the start of my pregnancy. Like most couples with kids, there can be a perpetual argument over who is or isn't doing his or her share. But we have managed (as far as I am aware) to reach a pretty satisfactory equilibrium.

Most mornings I get up with the kids, except on Saturdays when it's my day to lie in. Most nights, Scott puts the kids to bed, except the occasional night when I do it. It works, as he's a night owl and I'm a morning person.

When Scott gets home from work between 3.45-4.30, it is his time off to just shut the door to his study and chill out, though he sometimes has to do a dancing class pick-up. Then when I get off work just around 6, it's my turn to shut the door and chill out, and he takes over, playing with the kids, then putting them to bed. It works well. It's become a sort of unspoken arrangement, but I think we are both pretty happy with it. (Are you happy with the arrangement, Scott?)

So, with that in mind, I'll tell you about my incredibly easy and lazy 'work day' today. 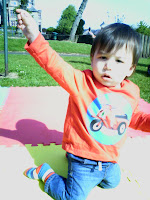 It is positively gorgeous weather outside, and one of the biggest perks of childminding is getting to - nay, being obliged to - take the kids outdoors on beautiful days like this. So this morning, we met up with my close friend Maria, also a childminder, at the park with all our kids. I actually had one less child than usual today, and the one I had is just only one year old (my nephew, Adam). So we set out some play mats on the grass, Maria's older kids played on the playground, and all the younger kids played on the mats. Basically, while Maria had to run around helping with ladders and slides and swings, I got to relax for the most part with the little non-walkers on a mat with balls and toys, soaking up the rays.

After the park, I picked up Lolly from nursery, and we came home and made fruit smoothies for lunch. Blueberries, strawberries, a banana and some natural yogurt tossed into a blender... heavenly! Then it was back out with Maria, this time to Lunderston Bay, a wee beach with a play park. By this time, it was very hot, so I sat in the shade (you know, being pregnant and all) with Adam, drinking a bottle of water, while Lolly and the other older kids played on the playground.

We left Lundy Bay to go pick up kids from school. I picked up Fifi, and exhausted as I was, felt it was only right to give her time outside too, after being cooped up in school all day, so we went straight out into the garden when we got home, and they played with the neighbours for a while. I took Adam upstairs and put him down for a nap.

This is where Scott and our equilibrium comes in.

Right after putting Adam down, Scott came home. He told me to just go back out in the garden with the kids, and he'd keep an ear out for Adam. (Adam is our nephew, remember. As a responsible childminder, I wouldn't just leave any kid while I went outside, I promise!) Fifi and Lolly played a little while longer, and then I brought them inside to get ready to take them swimming, a promise I had made earlier. I never even asked Scott if he wanted to come swimming with us, because I know swimming isn't his thing. Plus, I was taking them swimming during his free time, and I wasn't even considering asking him to give that up. Adam got picked up just after 4.30, and the girls and I got our swimming gear together.

And then, as I was putting the last things in the swim bag, I heard the girls shout, 'Daddy, where are you going! Why are you putting on your shoes?!'

I came out, and Scott had secretly packed his swimming things too to come along with us, claiming, 'Well, they are only young once' with a smile. I was delighted!

Off we went to the pool. We started in the Lazy River. After one lap around, trying to keep up with the over-enthusiastic girls, I was already exhausted. Scott said to me, 'Why don't you just go sit in the bubble pool and relax, and I'll take the kids around. We'll meet you in the bubbles later.' I tried to resist, but it was an incredibly tempting offer! The bubble pool was warm and relaxing. Scott basically did all the pool stuff with the kids, while I chilled out doing absolutely nothing!

After swimming, everyone was hungry. I have things in the house to make, but everything on the weekly menu needed a good half-hour at least of cooking, not counting pre-heating the oven. We decided to have a cheeky takeaway instead and got chicken sandwiches from KFC. Lolly saw an ice cream advert and asked for ice cream. Scott and I looked at each other... 'A certain other place does s-u-n-d-a-e-ses for 99p', I ventured. Scott didn't need to any other persuading, so after KFC, we hit McDonald's for toffee sundaes! We sat outside on the benches, and the kids got sticky eating melty ice cream in the heat, and Scott and I just enjoyed the peace and the breeze (and the ice cream - you think WE didn't have some too?!)

I wasn't sure if Fifi and Lolly could handle any more excitement in one day, but I had one more treat for them. 'All right, girls, when we get home it's bedtime. BUT, when I was at the shop, I found something for you. I found The Fantastic Mr. Fox DVD for only three pounds, so I bought it for you girls to watch tonight before bed!'

Oh the delight! Fifi and Lolly couldn't stop saying thank you for EVERYTHING (never have they been so thorough and grateful in their lives, I'm pretty much certain). 'Oh, thank you, Mummy, for taking us out in the garden and taking us swimming and buying us a DVD! And thank you, Daddy, for buying us KFC and buying us ice cream!' This mantra was repeated more than once. It was music to a parent's ear!

Scott and I shared bedtime duty. The kids - so far - have been perfect, watching their new DVD in bed. My hope is that they will be so zonked after a day of sunshine and fun that they will actually fall asleep during the film and there won't be any remaining bedtime duty to attend to.

It's been a perfect lazy day, but Scott's sacrificing his 'me time' to go swimming with us, without even being asked, was the best part. I had such a great day, and now look forward to taking a good shower, curling up in bed with my book, and then heading off to snoozeville, happy, tired, and a little bit sunburned. And full of appreciation for darling husband! :)

Posted by Lori Arnold at 2:43 PM
Email ThisBlogThis!Share to TwitterShare to FacebookShare to Pinterest