I have a new dead pop star crush.

Here's a fascinating story for all you who like fascinating stories.*
Gram Parsons (The Byrds, The Flying Burrito Brothers) and one of his buddies had an agreement that whoever lived to see the other die would somehow get the body and burn it at Joshua Tree National Monument. Well Gram died first and his friend actually followed through on the pact. He talked the funeral home into giving him the body (and how is great question) and burnt it in the park, drinking a beer, while watching his friend's body "sizzle."

Someone (I wish I could remember who) said in response to the death of Elvis, "Great career move." I have to say to you, Gram Parsons, the same thing. You just gained a fan. 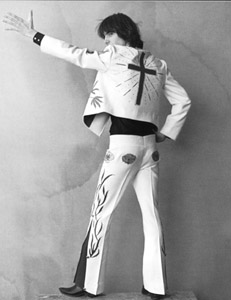 Great career move.
*Story taken from "In the Country of Country" by Nicholas Dawidoff.

[EDIT]~The answer to "how", above, Parsons' friend stole his dead body:

"Kaufman called the funeral parlor in the town of Joshua Tree and managed to learn that the body would be driven to LAX and then flown on Continental to New Orleans. He called the airline's mortuary service and found out that the body would arrive that evening. Kaufman recruited Michael Martin, who knew about the pact, and commandeered a hearse of Dale McElroy's, which she and Martin used for camping trips. It had no license plates and several broken windows, but it would do. They tried on suits, but decided they looked so ridiculous that they changed into their tour clothes -- Levi's, cowboy boots, cowboy hats, and jackets with the legend "Sin City" stitched on the back. They loaded the hearse up with beer and Jack Daniels and headed for LAX.
Kaufman and Martin arrived at the loading dock just as a flatbed truck rolled up with the Parsons casket. A drunken Kaufman somehow persuaded an airline employee that the Parsons family had changed its plans and wanted to ship the body privately on a chartered flight.
While Kaufman was in the hangar office, signing the paperwork with a phony name, a policeman pulled up, blocking the hangar door. Kaufman was sure his operation would be shut down, but the officer didn't do anything -- he just sat there. So Kaufman walked out to him, waved his copies of the paperwork, and said, "Hey, can you move that car?" The officer apologized, moved the car, and then, remarkably, helped Kaufman load the casket onto a gurney and into the back of the unlicensed, liquor-filled hearse." MORE...
Posted by Lori at 11:20 AM
Email ThisBlogThis!Share to TwitterShare to FacebookShare to Pinterest