Being A Human Being: The Right to Health Care

Bernie Sanders: "I happen to believe, and I know not everybody agrees with me, I believe that health care is a right of all people..."
Bret Baier: "Where did that right come from, in your mind?"
Sanders: "Being a human being. Being a human being." - Democratic Town Hall, Fox News, Mar. 7, 2016


I've said it before: health care is one of my biggest hot button political issues and has been for several years now. The above quote came from tonight's Democratic Town Hall in Detroit, MI, and it could not speak more clearly to my beliefs about a person's right to receive health care.

I spent most of my adult life in the United Kingdom under the National Health Service (NHS), a single payer health care system which pays for its services through taxes. I have personally experienced the good and the bad.

Here's an example of the bad, starting with a comparison of the good in the US.

When I was twenty-two, still living in the US just months before getting married and moving to the UK, a lump was found in my breast at a routine annual visit. The OBGYN at the college health center where I had the exam was concerned and scheduled an appointment for me the following week with a specialist. The following week, I saw the specialist who did his own exam and some scans. The scans showed two lumps which seriously concerned him. He said the size of one of these lumps was so large that he "wouldn't leave that inside anyone." He scheduled me the next day for a lumpectomy. Thankfully, after biopsying the lumps post-surgery, they were all benign, but he recommended that I get regular mammograms despite my young age because of the risk my body apparently posed.  This was in the United States.

In stark comparison, when I moved to Scotland later that year, I explained to my new GP my breast situation, and he flat out refused to schedule me for any mammograms ever because I was too young. He even refused to have a nurse perform a physical exam, because it wasn't time for my yearly.

Now let me say this. I lived in the UK and enjoyed the advantages of the NHS for nine years. There is only a small handful of negative experiences I can recount, none of which were life-threatening in any way. In fact, they all land in the range of annoying or aggravating. The rest of my experiences go something like this: 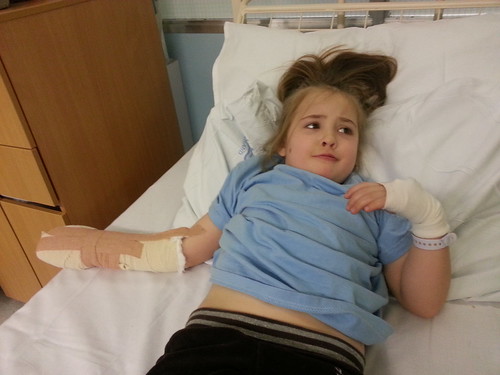 These are just examples of the medical issues I'm willing to share publicly. This does not touch on all of them. Here's the thing: despite the rhetoric that state-funded health care is sub par and discriminates against the elderly and takes years to be treated, this is not the experience of most people. Yes, you will find horror stories. I know people personally who have them.  Yes, there will be bad doctors and missed diagnoses and sometimes waiting lines. I know people who have had this happen to them too.  Yet, don't be fooled into thinking this only happens with socialized medicine. This also happens in the US; this is not a socialist problem, but a human error (or human asshole) problem.  For every NHS horror story, you can find a private health care one to match.

When I had that breast surgery at twenty-two, I was terrified. I worried for a week waiting for the biopsy report. Scott and I discussed over the phone what we'd do if I had cancer. (He was going to fly right over is what he was going to do.) I had never felt so much fear. When the report came back clean, I was relieved to tears.

Then the first bill rolled in. Something like $200. I breathed in deeply and pulled money out of savings to pay the bill. A few days later, another bill came in. It was around $400. The panic started to set in. My savings were for my wedding and for moving abroad, not for paying these bills! Then another came in, and another. One for the anesthesia. One for the surgeon. One for the hospital stay. One for the specialist's scans. One for the lab. I was under my parents insurance, so I knew nothing about deductibles and out of pocket expenses. I thought $20 co-pays were all I ever had to pay.  I ended up calling my parents in tears, because I could not pay all these bills - I didn't have enough in savings to do so.

Compare that to finding out I needed a c-section. I cried, because I didn't want to be sectioned and I was worried about my baby. But when we came out of it just fine, I didn't have to think about the bills rolling in. I could just be thankful my baby was alive.

When I first moved to Scotland, I broke a glass in my hand doing dishes. The cut was deep, blood was everywhere, and some broken shards of glass even got lodged inside the cut. Scott tried to get me to go to the A&E (ER), but I refused. He reminded me it was free, but I still refused.  Medical treatment had always been something I had to weigh up according to its level of severity and necessity. A cut I could mend myself with bandages and soapy water did not warrant visiting a doctor. Though it would have been free, I was not used to seeing a doctor for such things.

(For years, I could feel something small and hard inside my hand near that cut. A tiny shard of glass, perhaps?)

Here is my point.

Health care shouldn't deplete one's savings. A person shouldn't have to decide against care for their child because the level of severity doesn't quite justify the cost. Being forced to forego medical treatment because it would cost too much should never have to happen. A person shouldn't have thousands of dollars in deductibles to meet before the insurance he or she is paying into kicks in to help out. (True story: Sitting in the waiting room at the doctor's office a few weeks ago, I overheard a woman ask the receptionist to try billing her insurance company since she had now met her $4000 deductible - in February. In two months, her family had already forked over 4k in medical bills. What will the rest of her year look like, and how much will she end up paying out of pocket by December?)

Let me be even more clear.

A person working for minimum wage or living under the poverty line or out of work (for whatever reason) should not have to make decisions about his or her own health or family's health based on what they can afford. An underprivileged family with a child suffering from behavioral or mental disorders (ADHD, autism, learning disabilities, anxiety, or any other) or who has a developmental delay (occupational, physical, or speech) or who has minor or major illnesses (asthma, ear infections, or any physical ailment that affects his normal day-to-day activities) should have the same access to treatment as a family with the money to pay for it. But the reality is, in the United States of America, the richest country in the world, those families are having to make devastating choices constantly about their health care.
And when they do deem the treatments medically necessary - or when an accident occurs, like a severed appendage or broken bone - these treatments often land them further in poverty and debt. Medicaid only covers so much, and if you don't qualify for Medicaid but still don't have the money to fork over to pay all your medical bills (and heaven forbid something major comes up, like cancer), you are faced with crippling medical debt that will haunt you and your credit for years, even decades, to come.

How is this okay to a large majority of people in the richest country in the world? How are we okay, not only with our own insurance plans, that make us pay thousands outright before letting us access the coverage we are paying large monthly premiums for, but with knowing children and people living in poverty or near poverty are suffering needlessly because they do not have the money to pay for medical care?

Yes we have Medicaid and Medicare, which helps tremendously, and I am very much in favor of these programs. But as they stand now, they simply cannot go far enough to help solve the problem. When people who have low enough income levels to qualify for Medicaid are still being landed with copays and hospital bills they cannot afford, there is a problem we should all be deeply concerned about.

I agree with Bernie Sanders. Health care is a right. A human right. And where does that right come from? Where all other human rights, like safety and security, equality, religion, freedom from slavery or discrimination, education, adequate living conditions, and so forth, come from. They come from being a human being.