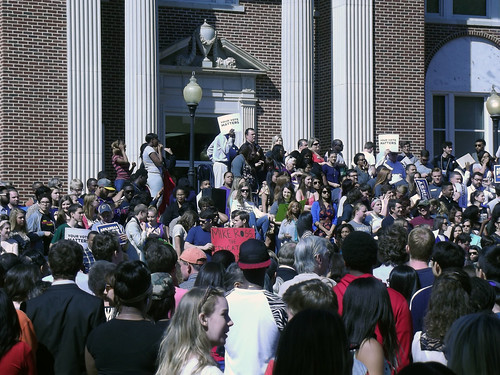 I used to hate politics. Mostly because I didn't understand it, partly because it seemed irrelevant, a little because it was cool to be "jaded" about it. (You know, when you're so young that you're jaded about everything.) I voted for the first time in the 2000 presidential election at 18 years old, following the sage advice of my dear Republican parents ("Just tick all the Rs"), which meant, yes, I helped Dubya get into office.
Then I buggered off to the UK and left y'all to it.

In the UK, as a non-citizen indefinite-leave-to-remain resident, I had no voting rights, so I paid little attention to British politics either. Besides, things seemed to be going better over there, what with free health care and all that, so it didn't matter much to me if we were Tories or Labour - I was getting socialized medicine and child benefit! (I was not, on the other hand, eligible for most other social programs, like the dole.)

Then the SNP started talking about actually holding the referendum they'd promised when they first came into power, and I started paying a little more attention. There had been a council tax freeze, thanks to the SNP? Oh, England doesn't get free prescriptions like Scotland? Nick Clegg wasn't the saviour the Lib Dems thought he'd be? Hmm. I'm possibly quite in favour of this idea of independence.

(Like all the u's I did there, as I reverted to British English?)

And then I buggered back off to the US and left y'all to it. Not that it mattered; I couldn't vote in the referendum anyway. I could only cheer my support and hope someone cared what the American thought about Scottish independence.

I came back to America much more open-eyed politically than I'd left it. I'd lived socialism up close and personal; I'd seen the benefits and the pitfalls. I had also looked at America through American eyes and a foreigner's; I recognized our strengths and our weaknesses.

Upon returning to the States, I decided it was time to get involved in politics. I dove into research for the gubernatorial primaries and elections in 2014. I started reading about budgets and spending, foreign policy, tax revenues, social issues, environmental issues, immigration. I started talking to people about these things, listening and arguing (usually not both at the same time), trying to understand.

(Let me add here, that in this time, I discovered Bernie Sanders and was already a fan and Facebook follower well before he announced he was running for President.)

I am still learning and still listening. (Sometimes, still arguing.) I have much to learn, but I'm in it now.  And now, all my political self-education leads me to this critical point in history, and I have to ask:

Are the presidential elections always this insane?

I keep hearing everyone say "all bets are off" with this one. Everyone's saying this is the strangest election cycle in a long time. Part of me wonders if this is just near-sighted, past-forgetting, hyperactive hysteria, or if no, really, this is madness.

I mean, the front-runner of the Republican party makes public remarks about a woman "bleeding out of her whatever", wanting to punch protesters, how he could shoot someone and still have followers, how much he loves "the poorly educated" because he won their vote, that all Mexican immigrants are murderers and rapists (sorry, "some are probably okay") and calls for Muslims to be banned from the country, and voters are flocking to the polls to vote for him. Then trailing a sad ways behind him are a myriad of unlikely characters, of which only one - maybe two - actually seem like real people and not drawings in a bitterly sarcastic political cartoon.

On the other side, we have a woman who is pretty well reviled amongst virtually all Republicans (and a fair number of Democrats) and an elderly socialist from Vermont of all places. (I recently had to look up Vermont on a US map, because I literally wasn't sure where it was.) I'm a Democrat, and I will strongly support either candidate because I think they would both make great leaders, but even I can admit they must look just as insane to Republicans as the current GOP lineup looks to me.

Any combination of this motley crew brings up multiple question marks. How on earth is this election going to go? I have no idea. Trump v. Clinton?  Cruz v. Sanders? Rubio v. Clinton/Sanders ticket v. wounded third party candidate Trump? How do you even predict outcomes like these?

One thing is for sure.  This election hasn't been much about "politics".  The issues I've been spending so much time researching seem to come up much less than, say, how many lies so-and-so has told, how many flip-flops so-and-so has made, how much so-and-so hates so-and-so, and how so-and-so is "the only person on this stage who".  I'm referring to both parties here, having watched a majority of both parties' debates. Are they usually so full of vitriol, ignorant rhetoric and blind partisanship?

One more thing is for sure.  No matter who wins this next presidential election, the future of American politics and its parties are going to change drastically. Or is that what they say every four years? I guess we're about to find out.