Well, we've kept it pretty quiet until it was a done deal, but this past weekend we MOVED! We moved out of Nowheresville into Somewheresville.  It's not quite the city, but Target is a five minute drive away, so I count that as a major step up in the world.

When the house gets less boxy and more decorated, I'll take some pictures. It's an older house than the one we left, which has its advantages and disadvantages. The closets are much smaller, the bathrooms are smaller, and it's got old features like popcorn ceilings and wooden panel walls and drafty doors. BUT it's also got some adorable quirks like a wet bar, a wood burning fireplace and a Harry Potter-esque room under the stairs which will double as a fantastic storm shelter in case of a tornado.

The kids are loving the new space. It's such a big house that sometimes I actually can't find someone. Usually though, it's a cat I can't find. They are having a difficult time adjusting to their new digs. I'm trying to teach them to use the toilet instead of a litter box, with modest - very modest - success. More often than not, Sassy pees in the bathtub, but hey, it's better than the carpet! And I'm proud to report there HAVE been some poos in the toilet litter, which means it's starting to sink in on some level. If all goes according to plan, I'll have potty trained kitties in about, oh, three to four months. Worth it!

Today was the kids' first day of school at their new school. I am LOVING that they wear uniforms again. I think uniforms are a great thing for kids, at least young kids. It's easier on parents, it looks neat and tidy, and it levels the playing field for kids across the board.

Jaguar also started in his new daycare. We loved his old daycare and will miss the wonderful people there, but this daycare is super-cool. I told Jaguar they had pet guinea pigs in every classroom.  He laughed in my face and said, "No! Dinosaurs!" I had to explain to him that the daycare did not have pet dinosaurs, just guinea pigs. He didn't really believe me until he saw for himself today. 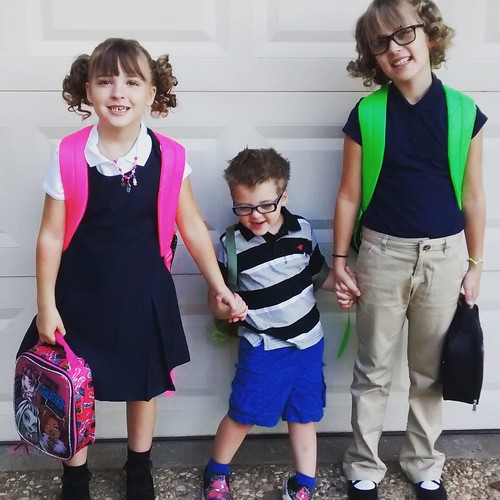 So now that we have hot water, a fridge (had to buy our own), and internet, the place is starting to feel like a home. Now we just need to stock up our wet bar (we live in a wet county again! No more driving out of city limits to buy wine!) so I can have a nice wee night cap before bed.

Things are looking up!

P.S. We have a guest room now, so if you out-of-towners want to come visit....
Posted by Lori Arnold at 10:21 PM
Email ThisBlogThis!Share to TwitterShare to FacebookShare to Pinterest
Labels: Arkansas, family, home, life, moving, pets