The Spider In the Doll's House

One thing you might know about me is that I am deathly afraid of spiders. Beyond arachnophobic.

At least I used to be.

There was a time in the very recent past that I would cry if I saw even a teeny tiny spider crawling on my ceiling. I used to shake out my shoes before putting them on, and pulling boots out of storage after a warm season gave me palpitations. I once sprang out of my bedroom crying, tripping over a wooden beam and slicing my knee open because there was a spider on my bedspread. I once had to call the neighbor to come over and kill a spider for me because Scott was at work. I once LITERALLY jumped onto a businessman's lap on the train because a spider had crawled onto my handbag. (Probably made his day.) I was so afraid of spiders that I couldn't even get near enough to one to kill it. If there was a known spider in my house, I could not sleep until it was dead. I had nightmares about flying spiders. Ugh, saying that word over and over is actually freaking me out a little right now.

Before I got married, I had daily panic attacks because my best friend's house, in which I was staying for a month between my apartment's lease running out and moving to Scotland, was infested with all kinds of spiders - big, black, hairy spiders, little skinny brown spiders, black widows, brown recluses - and even approaching the front door of that house would cause my throat to close up and I could barely breathe. I'm not sure I actually slept for a month prior to my wedding, and it wasn't wedding jitters that were keeping me awake. It was the six or seven spiders I saw daily in that little house.

But in the past two years, I have improved significantly. It started with killing teeny spiders. Like the little practically microscopic ones. I'd take one of Scott's biggest, most sturdy shoes (brogues usually did the trick) and smash them dead. Then with half a roll of toilet paper folded up so I couldn't feel the creepy crawly with my fingers, I could clean it up. Anything bigger than a pony bead was still Scott's territory.

I got braver and learned to kill even kind of slightly bigger spiders. I knew by this point I was moving back to Arkansas, land of venomous black widows and brown recluses - not to mention harmless but evil-looking wolf spiders - and would simply have to learn to kill these beasties before they killed me (or my kids). I got really brave. By the time I moved back to Arkansas, I had overcome my phobia of spiders and now I simply hate them. I can kill them now, even big ones. If they are small and of the harmless nature, I can even allow them to coexist in my home - as long as they don't crawl around too much or get up in my personal space. We have some spiders who have taken up residence in a few corners of our home and have been very effective in killing mosquitoes. I've learned to live harmoniously with some of these guys. I'm officially no longer arachnophobic.

To prove this, we even allowed a HUGE (I mean freaking HUGE) garden spider to live in our backyard for a few weeks. However, it was interfering with our kids being able to play freely in the backyard and with actual sadness and regret (actual regret!), we had to give it the old death squash. (It was EW. I mean EW. It was freaking huge.)


But I am currently still shaking, and my heart is still pounding over what just happened.

Scott is out at an awards ceremony at work tonight, so I'm home alone with the kids. I told the girls to go get their pajamas on, while I put Jaguar to bed. Suddenly, the two girls came barrelling through the house SCREAMING and crying.

"A SPIDER! A SPIDER! IT'S ENORMOUS! IT LOOKS LIKE A BLACK WIDOW!" they screamed, sobbing uncontrollably.

"Okay! Okay! Calm down!" I could feel a little terror welling up in my chest, because even if I'm not totally arachnophobic anymore, I still hate the wee buggers. Especially black widows. I put on my tennis shoes and grabbed one of Scott's sturdy shoes from the shoe rack.

"Tell me where it is," I instructed Fi.

She told me it was on the top level of the doll's house. I crept into their room, and from the door could see what they were screaming about. It was no black widow.

"HOLY CRAP," is about all I could say.

Black legs danced around on a creature as big and black and hairy as a tarantula. It wasn't walking away but was moving its legs like it was stuck. The legs were thick and hairy-looking. Each leg looked about three or four inches long. How on EARTH did that thing get in here?!

How the FECK am I going to kill this fecker?!, I thought wildly. "GRAB ME A GLASS CUP." I said to Fi, trying to keep my composure. Shrieking, she ran to the kitchen.

"None of them are big enough!" she wailed. She was right. Oh my STARS, she was right. So I ran to the kitchen and grabbed a large cereal bowl. It might be big enough. I would trap it under that bowl until Scott got home. Somehow. Oh heavenly gracious, PLEASE DO NOT LET THAT SPIDER RUN! Wanting to pass out, I took the cereal bowl back to their room and crept closer to the doll's house.


Let me pause for suspense.


Feel the terror with me. Let's all imagine catching a bloody tarantula with a cereal bowl.

As I approached the doll's house, I burst out laughing, maniacal laughing.

It was no tarantula.

It was a fringed trumpet noisemaker, being blown around by the ceiling fan. 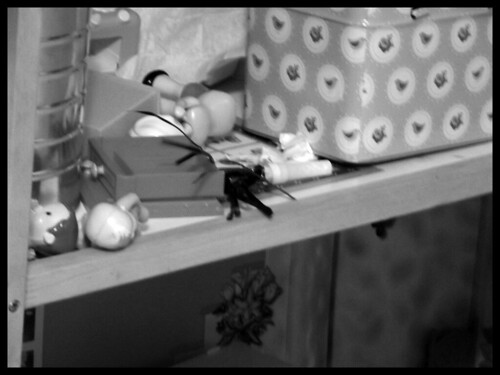 I have never been so relieved. I also promptly allowed myself the freak-out that I'd been bottling up for the sake of my children. I threw that evil party toy in the trash and will never look at them the same way again.