I've been feeling rather obsessed about my weight lately. Not that I'm overweight, (and my friend Kieran didn't REALLY say we were fat), but I would rather like to feel a bit slimmer and more toned. I started trying to motivate myself by sticking skinny pictures of me on the kitchen cabinets to deter me from eating snacky junk, but all it did was depress me.

Then we went to a pole dancing class, and the photos from the event made me realise two things... 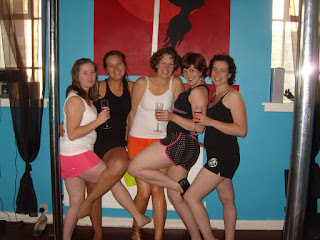 Two, I need to lose the thunder thighs.

Perhaps THAT picture on my cabinets would do the trick.

So I made a plan. Not too regimented, as that would never work, but I took my motivated self to the grocery store and filled my trolley with carrots, peppers, broccoli, parsnips, tomatoes, asparagus, baby corn and various fruit. I also added organic, free range chicken and eggs, smoked mackerel and muesli. Yeah, muesli.

And a pair of welly boots for Lolly, but that was separate.

I plan to make soups this week with loads of veggies for dinner (and grilled chicken for Scott to add to the side). Lunches will be fairly normal things we usually eat, but I'll replace some of the less healthy meats with the mackerel, and our snacks will be smoothies and steamed veggies. Fifi even said she would eat the baby corn. We'll see.

So here's the thing. I hoped it would come out cheaper, even going for the organic, free range chicken products. But it didn't. Damn it.

I used to feel very strongly about the ethics of the foods we eat, but when you are on a tight budget, that kinda thing goes out the door. But after reading an article recently about all the antibiotics, water, and junk they pump into the chickens to make them sellable, I had a change of heart. I would buy the good stuff not because it's 'the good stuff' but because it's the normal stuff, not the sub-par stuff. And I would hope God would somehow reward me for my ethical behaviour by not making it that much more expensive.

Anyway, we'll see how long it lasts. I had a bowl of muesli for breakfast, and I even measured out an exact portion with my kitchen scales. (THAT won't last.) And it was a reasonable sized portion, much to my surprise. And because I bought one with loads of fruit in it, it was palatable. Unfortunately, that means loads of sugar (and not the good kind - dried fruit is packed with perserving sugars), but hey, Rome wasn't built in a day. I need to ease into the taste of 'healthy' stuff.

So, we'll see how it goes. I will also make more effort to get out and exercise more than just twice a week at Footloose rehearsals. I live in town, I could always take up running and thrive on the car horns and pervy whistles I might get to motivate me further.

And I've started using fake tanner.
Posted by Lori Arnold at 5:11 AM
Email ThisBlogThis!Share to TwitterShare to FacebookShare to Pinterest